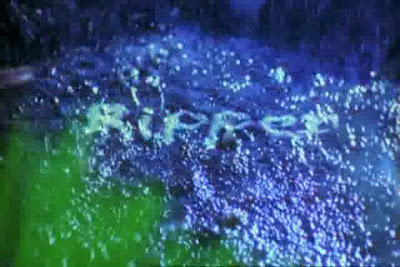 I took a word from an online friend and tried Ripper: Letter From Hell as he gave it a four out of five rating in his review for it. Honestly, I wouldn't blame him for liking it as taste differs but, in hopes he'll forgive me for saying this, it's generic.

We start with the classic opening; teenage girl running from a dangerous madman who's cutting down her friend-count by either burying them, nailing them to a tree and stuffing them dead inside boat compartments. Our hapless thespian even accidentally shredded a bud through a boat propeller before the killer tries to catch her, but after stabbing the killer's hand and losing him into the water, this (un)fortunate gal survives and comes back to society safe and sound.

Or, least we thought. Some time later, Molly Keller, said survivor, is now attending a criminology class in a high class university, bitter from the event that took place five years ago. Of course, there's the usual group who are either with her or against her (or somewhere in between) inviting her to an after class party (There's always a party after class in these movies), but, as predicted, we got our first post-opening-kill murder taking place on a costume rave, the victim being one of Molly's acquiantances.

Now, we all know whoever this guy slicing people's throats is the same killer who attacked and murdered Molly's friends years ago (The DVD cover sure that clear), but the real question is who was it? Molly began theorizing all this, thinking she can solve it, but the bodycount still rises and soon she (along with the doomed group) have no choice but to go to some cabin in the woods owned by their professor, because as we all know, it's always safe there, right? Especially if said cabin is next to a logging mill with a working buzzsaw. Right?

Yeah, you know where this is all going and that's just it. Perhaps I've seen way enough teen slasher flicks made around the 90s to know every nook and crack on the road, but there is always something that'll make them stand out. In Ripper, they tried to use the old "profiling serial killer" approach where the action coincides with amateur campus-grade cop drama and the dead teenager killings, though calling it "amateur" is an understatement since it does got the attention of an investigating detective. Regrettably, it ain't working out for me as I was hoping someting bigger from Ripper rather than, dare I say, a Scream clone, and the utterly confusing twists in the end surely didn't make it any better. I had to search the web just for an explanation of what just happened and I don't like that. I don't want to go to the web to understand a slasher movie! I sit here to watch slashers to have fun. Bloody, braindead fun. Fun! Ever heard of the word? If I want to play detective, I ought to watch a giallo or solve the mystery of my green furry meat loaf. (long story)

There's also the matter of the lead being not too sympathetic enough to be rootable. In fact "not too" is an understatement. I loathe A.J. Cook 's character, who had to be that one lead that you barely care about on what might happen to her at all! I mean, I know her friends got killed that one time and now it's all starting again, but does she had to be so hard-headed, rude and bitchy about it? She even gets a love interest but it's hardly working since I don't exactly feel for her even then! It's pointless!

So is there anything worth from watching Ripper? Well, for once, I do like the kill scenes; they're very basic, easy on the eyes, and they put off some of the less annoying casts I've seen so I'll really give this movie some ups for the slasher scenes. The logging mill scene more specifically.

I'm not dissing this movie- well, maybe, yeah- but like I said, less talky, more slashy is how I like my dead teen flicks and Ripper tries too hard to make everybody think about everything that's happening and barely leaving any resolution for that. At least that's how I see it. Taste differs I guess as I mentioend prior, and you're reading this from a guy who gave a passing remark to trashes like TAG! The Assasination Game, Halloween 6: The Curse of Michael Myers and Killer Party!

Those looking for a serial killer flick done in a teen slasher coating, try your luck with Ripper. Me? Give me my Urban Legend movies!

Bodycount:
1 male found buried and dying
1 female found crucified to a tree
1 male found dead
1 female accidentally shredded through boat propeller
1 female knifed to death
1 female falls off a cliff
1 female gutted with a scalpel
1 male rammed and crushed against a tree with a car
1 male sliced through logging saw
1 female beheaded by logging saw
1 male hacked to death with an axe
1 male executed via electric chair
total: 12
Posted by Kaijinu at 1:36 PM