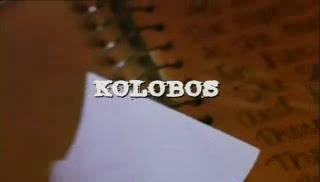 One of the biggest highlights of the 90s was teen Reality TV, as kids of that era somehow love the torture, pain, and misery of obnoxious teens crying over whatever reason that'll come in mind. Thus using this fad as a plot point for a few horror movies becomes a small trend itself that kinda continues to this day, but here'll be covering one of the stranger titles to follow the fad.

Kolobos is one of the many "Reality TV slashers" to come out during their prime, though the emphasis of the TV genre to it's plot plays little as the rest of the movie follows a more psychological bodycounting run. It starts off with a POV shot of a wounded girl staggering at a rainy street. A car hits her and the driver sends her to a hospital, where she's kept for questioning under suspicion that she may have done the damage to herself. Unfortunately, the girl remembers very little until she saw a newspaper ad looking for willing participants for what is basically a Reality TV show. Almost instantly, it all comes back to her...

We are now going face to face with five others teenagers who introduce themselves through promotional audition tapes: we got the comedian, the student, the loudmouth brat, the party girl and the rejected loonie house releasee. (AKA probably our girl) After a night of dinner with the show's director and probably hours later watching a cheesy slasher flick series, one of the girls gets their gullet sliced open by a projected buzzsaw from nowhere. One girl notices, screams, and the whole night went crashing down like dominoes. Evidently, there's a killer with a nasty habit of skinning his own face trapping them in the house and he somehow rigged it with some bizarre traps, further dooming these teens to the slaughter.

An engaging piece of horror imagery, Kolobos finds itself slowly moving to stranger tides along with the characters' descent to unimaginable madness. Early on, the movie does have the slasher tone and mystery head on, but the further the murders proceed to bump off the teens, the more we get to the surreal horrific hallucinations that prowl our obvious final girl. Interesting to note that said "hallucinations" are often accompanied by some Italian horror inspired set-up such as weird editing, lighting and sounds, which I believe was already foreshadowed by the movie's own opening theme, which sounds awfully familiar to that of Suspiria, a classic Italian horror that also practiced using horror imagery.

As a slasher, Kolobos is fairly thrilling; while it does suffer some pacing problems. odd acting and the overall lack of characterization, it delivers a pretty good bunch of onscreen murders and gore (including the aforementioned buzzsaw kill), pretty much a roundhouse of shocks, disgusts and grue, all in loving close-ups and even some odd angles. It's a sick and fair set for a slasher film of its time, quite refreshing with some creepiness to go around, mostly coming from the odd imagery at the near end.

So, where does Kolobos comes short in? Not much at a fact, but there is one thing that both fascinates me and caught me off guard: while the movie is a clear hybrid of traditional teen slasher and some Italian inspired visual horror, the film's final twist may not sit that well for some as it can get dang confusing. It's not exactly a first, but without spoiling much, it may debunked a lot of things that happened during the movie, though the reveal still found a way to be creepy.

It's a good film, but a little too familiar around its way; Kolobos manages everything it can with subtlety, harking some efforts from its own. It ain't a perfect teen slasher, but i find it recommendable for those looking for a good rent or late night viewing.