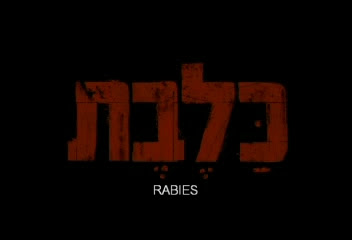 Surprise, surprise, I loved Rabies. Yep, you heard me. I'm the guy who opens his arms to misfit toys and one of them was Israel's own take on "slasher" horror.

Opening with a woman in darkness and a man looking through a dirtied opening, siblings with incestuous feelings with one another, talking as one of them got stuck in a trap made to catch humans, apparently set-up by a deranged killer. The brother assures his sister he'll get help and leaves her, only to have himself injured by something off camera. What seems to be a common set-piece for a backwoods slasher later turns for the unexpected: a park ranger had his dog murdered by the killer and was able to stop the madman in time before he could do something to trapped woman. All the while, the brother managed to flag down a quatre of tennis players, who in turn phoned in a duo of police officers to help them. But with each character a pawn of their own hidden agendas, violence, jealousy, intolerance, confusion and personal weaknesses, it wasn't too long before these imperfections began to kill these people one at a time...

Rabies is a misnomer of sorts but a wisely chosen title in a sense of symbolism; the rabies here wasn't the literal disease, but rather it's us. Humans. The ultimate imperfection and natural disease that'll more likely lead to one's own or another's destruction. Almost all of the cast of the movie died off a gruesome, if not undeserving, death, all of which caused by their own will or the lack of either conscience, understanding or reason of another. It's almost like A Bay of Blood (1971), only instead of people dying because of a certain prize, we got people dying for being themselves, as if saying something about our nature. It's a smart context, but it's sadly overlooked a lot due to the film's unusual characterization and plot flow.

That being said, it's kinda easy to know why very little people enjoyed this; with few likable characters and enough twists and turns to kill off an expectation, Rabies toyed around the concept of what we know and broke all of it in one disturbing gore piece. In fact, despite marketed as a slasher, the aforementioned killer is the least of our worries with all of these going on and, spoiler alert, he's also one of the "survivors" this film will eventually have. (Even giving out a witty remark at the end that pretty much sums the whole movie.) It's a slasher film of an atypical level, bent in too many ways that it's almost lost the sub-genre if it wasn't for the bodycount, the structure and the presence of stalk-and-stab set-pieces.

If kills is what you came to see here, I would say you would like it, at least. It's nothing special as we seen most of it before, but I do like the way they were built up to. There's tension to them, and for the better, they even had a good dab of gore. At times, it even delivers some shocks that you never actually see coming until it's right there in front of you.

It's creative, but sadly overlooked and underrated, Rabies may not revolutionize the slasher genre, but it is a decent and fair attempt to bring some originality to the sub-genre. Being the first of its kind coming from Israel, I'm really am impressed by the fact that it tries a lot to be something of its own, rather than a homage as some other country's first slasher releases. (Russia's Trackman, for one, is a homage to My Bloody Valentine, while that dreaded Angel Negro, Chile's first stab on the slasher genre, is more like a failed Scream clone...) Any flaws of the film would be it's defying taste, but I am sticking with my words, I love Rabies. Twists, turns, gore and everything in between.

Bodycount:
1 dog had its throat cut with buck knife
1 male pushed to a spike, impaled
1 male brained with rock
1 male bludgeoned to death with sledgehammer
1 female decimated by land mine
1 female ran over by car
1 male shot to death, bled to death
1 male bled to death from wound
1 female burned to death
total: 9