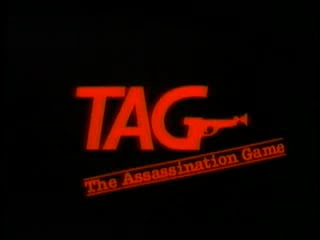 TAG! The Assassination Game (1982) (AKA "Everybody Gets it in the End")
Rating: ***1/2
Starring:  Robert Carradine, Linda Hamilton and Kristine DeBell

If you would talk to me five or so years ago, I would say that any horror film killer who uses guns isn't a slasher. Little do I know back then, there's already a film that will prove me wrong and that's TAG! The Assassination Game.

In a university where stereotypes are ever present, a game of TAG (short for The Assassination Game) sweeps through the dorms as students, armed with dart guns with suckers in the end, hunt each other down for the ultimate title as the best "killer" in campus. Each students are given a target that they must "kill", who in turn must give up their target once they're hunted out of the game. New to this fad (yet surprisingly good) is one Susan Swayze, psych-major who, one night, had a close call of being a victim herself if it wasn't for the intervention of a school journalist who happens to be staying in the right place, at the right time.

Bitten by the love bug, the lover boy-paper boy makes a believable (?) excuse to hang out with the toy gun-totting hottie as a part of his article about TAG. Cue cheesy saxophone love theme, some fun scenes involving the game itself and we have a cheesy romantic comedy working here.

And then we have Gersh, a sweaty TAG-obsessed student played by pre-Re-Animator (1985) Bruce Abbot, who just happens to be the five year champion of the game. When a fluke shot had him "killed" by a lucky noob, Gresh loses it and begins playing the game with a single rule change: he'll be using a real gun. One by one, he kills off his targets and soon, it's down to just him and our lovely psych major, and the "real" fun starts...

TAG is cheesy at its fullest, but it also has the fortunate luck of being creative and fun; the plot is new for a dorm-built slasher flick, in which by using this unusual game as a backdrop gave the film it's own unique taste that made it rarely boring while the killings aren't going on. Some of the fun elements that made this film watchable includes how each TAG player go on with their hunting gimmicks, often have us going through Porkies or Revenge of the Nerds -style antics where kids are awfully carefree, weird and cheeky for campus students such as a guy who plays the game with his pet rat named Ratatoille (no joking!) and Police Academy's Michael Winslow as a student who makes the same weird noises as his character from the aforementioned comedy hit.

If that ain't enough, TAG even did some James Bond spoofs; with an opening featuring dancing ladies and silhouettes of a tuxedo-dressed gunman, and our killer dressing up from average, sweaty weirdo to a cool, suave, neat-hair cut James Bond imitation at the near end, you can tell TAG was in it for the cheddar fun.

Sadly, slasher fans often overlook this film not only because of it's obscure release, but also from the fact that the killer's weapon of choice may not strike many as a certified classic slasher choice. There's also the matter of taste, as the film never focuses on just being a straight bodycounter, but more of a University comedy with some gun-totting "slasher" on the side. Gore isn't strong since it's all gun kills, but it's fairly suspenseful, especially the cat-and-mouse chase at the end which could have ended anytime considering the loonie just has to pull a trigger.

Gun-wielding slashers may not catch on, but TAG made it work with an end product that is unique for a campy B-flick and honestly fun if it hits you in the right time. Just don't let that hit be coming from Gersh, okay?