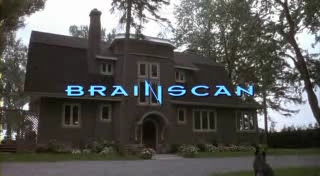 Funny thing about this film is that I saw this as a toddler, under the bootleg label "Back To The Future 4"  and the very image that remained with me to this day was a scene were a boy gets swallowed whole by a guy with a stretched out mouth. Guess you can tell how messed up my childhood was...

Michael is a sullen 16-year old motherless horrorphile who's constantly left alone by his workaholic father over business trips, leaving him under the company of a single punk best friend, some fanciful (voice commanded!) softwares, and dozens of horror titles to waste his time with.

In one ordinary day, Michael came upon a magazine ad showcasing a new game called Brainscan, promising a whole new type of gaming experience. Interested in what the game could offer, he orders the it and, much to his delight and surprise, finds out it's a murder simulation where in he stalks and knifes a man to death. Things were fun at first until a creepily identical killing shakes the neighborhood.

Confused, scared and suspicious that the game may have something to do with the recent crime, Michael refuses to play the next free installment of the game that's mysteriously delivered to his doorstep. But when a punk-attired cyber-demon named Trickster materializes in his room and threateningly persuades Michael to continue playing or be jailed for the sloppiness of his first murder, endangering not only himself but also everyone that is close to him as his paranoia and frantic behavior draw the attention of one Detective Hayden.

Tackling concepts such as manipulation, paranoia and responsibility, Brainscan is almost a slasher flick thanks to a (very) brutal murder of a sleeping man who gets repeatedly knifed and had his foot sliced off as the killer's trophy. After that, the movie slowly descends into a morality tale of murder and the consequences that go along with the crime, a concept I find quite more disturbing since the main lead and suspect (played by young Edward Furlong of the Terminator 2 fame) happens to be young. Think an episode of Goosebumps, only less campy, slightly gorier, depressing, and even a bit sleazy. (There's a snuggle scene between Furlong and a scantily clad Amy Hargreaves, also in her early teens.)

The gore count actually decreases the more the film dwells into the plot, which is a clever curve ball since it actually help focus more on the psychological side of committing murder rather than the guilty thrills of it. Though some scenes do come off more comical thanks to the inclusion of an Iggy Pop-Freddy Krueger hybrid named The Trickster, who, as his name suggests, coax our anti-hero into killing and cause unintended havoc through his neighborhood; his appearance was actually more of a minstrel than a murderous demon, and his odd behavior (cheesy dancing, eating raw chicken with mustard, etc.) doesn't really help establishing him as a threat. However, he does have a few moments where he made me feel a bit uneasy; his appearance never meant good news in a harbinger sort of manner and his unaligned nature never made him clear of his true intentions for his victim.

In the end, we never really get to understand this villain other than that he may or may not even exists outside of the game, an idea toyed around with the film's final "twist". (a possible drawback depending how you take it) But his role is enough to make him scary: he's the inner demon that exists not only inside our lead, but also in anybody who longs for horror. Real horror.

Brainscan also plays around the idea of concept vs reality; many of the scenes with Trickster in it happens only when he's alone with Michael, which puts us to question whether Michael is actually losing mind or being manipulated, which is scary considering it has a dab of realism to it. A dab since the fictional Brainscan game itself is portrayed unarguably laughable: I'm not much of a gamer (in fact, I don't own a single game console except a classic Gameboy that I broke when I was a wee lad), but did 90s games really came through a series of disks instead of one single cartridge? And since when did we had the technology to use brainwaves as the ultimate gaming console? Aren't we still working on that?

Laughable game logic aside, is Brainscan a good movie? My answer is and always will be: it depends. The film has a message. A murder allegory to be more precise, something that I find as a refreshing angle from a B-grade movie. The tacky special effects show a bit of age from the film's part and I'm sure some fans might find that distracting (not to mention the story's pacing may turn some gore-hungry viewers off) but as a whole, Brainscan is cyber-goth horror at it's best, at least for a 90s entry, and I can see why some are hailing this title a cult classic...