They will end the world: My top 20 Cabin In The Woods Monsters 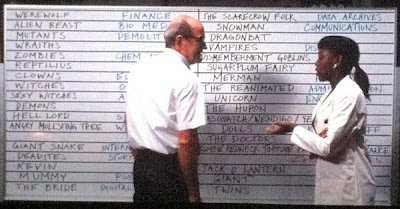 So, Just has The Cabin In The Woods suggested, our world's gonna end via full on attack of seemingly immortal horror movie monsters. If that's our fate, then I'm just gonna go head on and say Best Apocalypse Ever!

But before that happens, let me just share you guys my top 20 fave little (and huge) nasties that mauls, bites, and maims in one of 2012's most anticipated and exciting horror-slasher hybrid! So start the count down of the world's end with:

20: Zombies- Ah, the classic set-up. Death by Zombies! Or in a shorter term "Zombiepocalypse!" As a second fave horror sub-genre, Zombies had always had a good on impression for me, especially the slow ones. (The Fast Ones just overdid the threat, personally...)

19: The Reanimated- I'm not sure why the fans, or maybe even the staff, called these weird fuckers as "The Reanimated" since they look little like revived bodies but whatever. So long as these bastards stop looking with their freaky upside-down heads (and climb on ceilings!) I'm cool with them...yeesh...


18. Fornicus, Lord of Bondage and Pain- An obvious Rip-Off of Hellraiser's Cenobites (maybe even one of them!), Fornicus got in my list for being a good little tribute to my childhood fave horror franchise! Now if only he did a little more than just look menacing...
17. Merman- Ah the irony, you want something in life and next thing you know, you'l get it when you're about to bite the big one. One thing's for sure, Merman is really scary...

the clean up is a nightmare!

16. Jack-o-Lantern- Dude, it's a Jack-O-Lantern headed man, in an old-timey suit, that breathes fire! Screw any other Jack-O-Lantern headed killers or monsters out there! Somebody make a spin-off using this monster!!!
15. KKK- A trio of Klan members (well, two members and an official) is seen briefly on a monitor, standing patiently for their release. Hmm, Murdering Racists White Supremacists labeled as "monsters". Seems kinda fitting, just wished I could had seen them in action, they'll make one hell of a controversial slasher villain...

14. Suffocator- Another briefly seen monster, an undead man with a penchant for suffocating victims with plastic bags. Subtle, but least he looks cool!

13. Doctors- We really need more good killer docs out there. These guys were glimpsed for a few seconds, about to cut open an unfortunate fella, which is more terrifying considering their eyes are sewn shut..


12. Dismemberment Goblins- A duo of crazed and mischievous goblins was first seen splitting a soldier in half (and dwarf tossing it), and later, through the monitors, riding a go cart. Heck, it has Gremlins written all over it, only more extreme! Gotta love that part!

12. Angry Molesting Tree- Oh God! Evil Dead reference! And a fun one at that! Who knew a tree would get angry enough to puree a guy into...well, a bloody fountain?

11. Clown- Hey, you know me. I love killer clowns. Especially the ones impervious to bullets and brandishing a knife!

10. Dragonbat- Now, this is something I can fully appreciate. Being a fan of giant monster flicks as well, this man sized bat monster impressed me with it's vicious look. Split-mouths, high-pitched roars, awesome wingspan, why not?


9. Dolls- A quartre of porcelain masked murderers. I'm a guy who owns a part of the web for this dedication for slasher flicks and anything else in between. Need I say more?


8. Mutants- Though they were just in it for a few measly seconds, these freaks had the most funniest looking kill I've seen in history. Who knew death by toxic vomit would be so gross and randomly funny for me.


7. Witch- This is an awesome rendition of a traditional witch with equally awesome powers! So far only two is seen: levitation and the most creative visual death I've seen: literal soul-ripping!


6. Alma Wade- AKA that creepy girl that stalks a wounded soldier. She's supposed to have psychic powers, but I'm just gonna admire the fact that she looks so calm and cool along with the mayhem.


4. Sugarplum Fairy- Let's all agree with one thing: she's creepily adorable. I mean she does ballet while peeps are being mauled to bits! If it weren't for them raw of pointy teeth I would had hugged this baby!

3. Unicorn- You got to admit, this one's a real shocker! Who knew a unicorn would qualify as a horror monster? Well, at least now we know what's the horn for...

1. Killbot- Aww, sweetest of all doomed angels! This has to be the coolest thing in the purge for me! We hardly get killer bots in horror flicks. Gore-inducing killer bots, not the shoot them with lasers kind, and this one's a Godsend for me! Coolest thing ever! 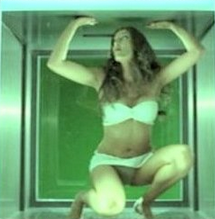 50 Foot Woman- Come on! What's a horror flick tribute without one of the hottest classic 50s B-Movie classic monster?

Kevin- Ah yes, the legendary "Kevin" That nice harmless guy that looks like he works at someplace like Walmart. How I really wished I've seen him...

The Huron- Sounds like an awesome monster! mentioned to be a Native American with a habit of scalping people, a probable tribute to my fave cheese fest slasher Scalps (1983) 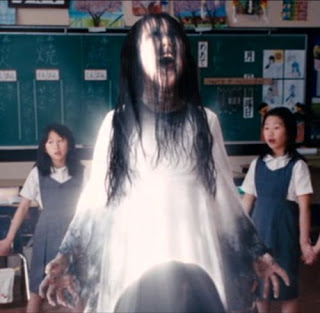 Kiko- Augh, I know I'm very open to everything, but if there's one thing I'll never fully appreciate, unless they try real hard, it is long haired ghosts. I've seen them a lot of times and I already know the formula of their movies, but Kiko here proved something I never thought is possible and that is how cliched some of these Asian ghost flicks are. 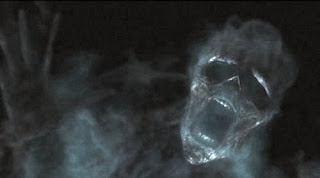 Wraith- Oky, he looks cool, but if we're gonna put the context here, all this guy did is go through people. Which is lame...and why I don't watch too many ghost movies... Now if only they showed how he could kill, I might appreciate him more.
Posted by Kaijinu at 9:15 PM