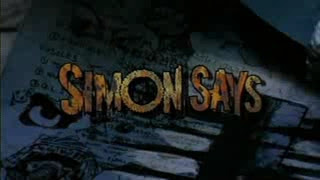 Did you know the man behind the cult favorite family flick Harry and The Hendersons (1987) once tried to do a slasher? Did you know said slasher was fun despite the overall cheese fest? In 2006, William Dear stepped down from making well-meaning family comedies and dramas and took a taste of the dark, gooey side of the cinema as Bill Dear with Simon Says.

In a near generic opening, we see a black and white family movie of twin toddlers playing on the lawn which escalates disturbingly when one of the toddler smashes a toy truck over the other. For some unexplained reason, this turned out to be a dream our lead girl's having, which makes no sense since the film clearly point out that she doesn't know these terror tykes.

From there on, we follow the usual trail; kids go camping, all of them stereotyped (the stoner, the mean girl, the slut, the white guy, and our marketed final girl), people warns them not to go (twice), teens stop for gas and food wherein they meet a creepy mentally-handicapped guy named Simon and his twin brother Stanley. (If you believe these twins are the ones from the dream awhile ago, you earn yourself a cookie)

As the kids go on their way, we get our first kill involving a random hitch-hiker and a pickaxe tied to a rope. Soon enough they reach their backwoods spot before one of them leaves and get hunted down by a killer (dressed as a bush, no less), leading to the earliest unmasking ever. As you've guessed, it's one of the twins (or both) and they're killing people for...well, I don't know, but they seem to be enjoying the heck out of it so I'll just leave it at that.

Made as a throwback to 80s slasher, Simon Says is backwoods horror that is either a diamond in a rough or a turd in the dirt, possessing everything that makes a bodycounter film good and, too, those that make it bad.

The story, for one, is at it's most basic, bumping over every cliches known in these films before treating us with the bloody stuff. Thankfully, the wait's worth it as Simon Says is blessed with some fun and gooey kills, some done through CG but never devoid of old school latex and corn syrup as we get crazily impressive traps set around the woods dismembering legs, impaling people, and even shred unfortunates into bits in full practical effects. To top it all off, we even have a pickaxe hurling contraption resembling a cross between a medieval catapult and a cannon, a device that I find really impressive coming from a psycho who may have enough free time in his hands to design and invent all this.

Sadly, just as some bad 80s slasher out there, we're also filled in with some unexplained plot holes; aside from the fact we got a final girl who dreams of other people's memories for no reason, we also got a random horse riding girl who appears all ghost-like just for the sake of it. There's also that time-filler massacre involving paintballers that happens sometime around the middle of the film, a possible shout out to a similar scene to Jason's triumphant 1986 return from the grave in Friday the 13th: Jason Lives. It's all fun, but it serves no purpose other than to heighten the kill count. (Not that I'm complaining, of course.)

With little mystery on who's doing the killings and cheesy effects for both practical and CG murders, Simon Says was never a film to be taken seriously. While tastes will be tested and tolerance for cheese will be needed, the film's straightforward slasher feel has little much to offer but to entertain a boring night with an unlikely scenario, unlikely villain and, yes, unrealistic kills that's conjured up for the sake of your grim enjoyment. My only suggestion on how to fully enjoy this film? Switch off. Yer brain may not feel safe with you watching this title...

Bodycount:
1 male stabbed in gut with knife (flashback)
1 female stabbed to death with knife (flashback)
1 male gets a projected pickaxe to the chest
1 female gets a projected pickaxe to the back, dismembered with butcher knife
1 male had his legs shredded through a pickaxe-lined disk
2 males shredded to bit through pickaxe-lined pillar
1 dog stomped
1 male pinned to a tree by a thrown pickaxe
1 female knifed on the back, thrown and impaled on a pickaxe
1 female hanged and swinged to an incoming car, hit
1 male impaled on a pickaxe
1 female hanged
1 male burnt to death
Total: 14
Posted by Kaijinu at 2:51 AM