Pop goes the Weasel. And Pop's head: Sloppy The Psychotic (2012) 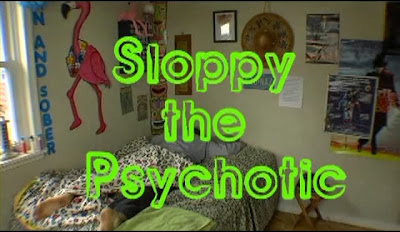 From Mike O' Mahoney, the sonovabitch that brought us that wildly entertaining Deadly Detour (2011), comes another slasher that doubles as a big middle finger to restricted and tamed massacres.

When Mike, a luckless man working as a cheerful clown gets a slight disagreement with one of his clients, the incident was reported and blown out of proportion to the point this poor sap loses his job. Going down a downward spiral, Mike goes on a drinking spree and ended up murdering a girl later that night. This somehow awakened his bloodlust and he soon rampages through everybody that wronged him, eventually working his way into killing innocent bystanders the further his sanity crumbles.

While Mahoney's debut is more of a straight-up backwoods slasher that follows the rules and cliches religiously, Sloppy The Psychotic is faster in pacing, better in acting, and hails a sizable number of random murders enough to have it considered as death porn. You would usually think a colossal body count is a shallow reason to praise a horror movie this bad but the direction in this had so much energy you can't help but respect it somehow, especially seeing that Mahoney himself multi-tasked this labor of bloody love as he wrote the story and took the role of Sloppy himself. (kinda explains why he and his star character share the same name)

The further the movie goes, the more erratic it becomes; some gross-out gags and black humor is tossed around fairly to even up what could been a mean-spirited shlock, especially if it pokes around in murdering mentally handicapped adults in wheelchairs and massacring an entire party full of kids with a lawnmower and a barbecue grill. The effects around these parts still looks a little cheap but it's juicy enough to keep a gorehound watching and goes by to the next quite quickly in its short running time.

The gripe around this is that, underneath the blood red goodness and charred-up kids, there's really no story. Like how The Final Destination is simply "just about " about survivors dying after cheating death or how Nikos The Impaler is "just about" about a rampaging barbarian loose in modern New York killing people, this one is "just about" about a clown killing people after he lost his mind being fired (and a little too quickly if I may add) and that's pretty much it. But if I had to choose one of the two, I would say Sloppy's more inclined to Nikos, for being sickly fun in an illogical, suspiciously convenient and raunchy term.

It's not something that will appeal to everybody (and by everybody I meant normies and horror fans who prefer a milder approach to their movies) but if you're the kind of person looking for an easy fix for bloody bodycounting, then Sloppy The Psychotic is messed-up, stupid, offensive, inappropriate and really, really fucked-up DIY horror cheapo. Stick around for these reasons alone and in the near end, you'll love every minute of it!

Bodycount:
1 female bashed on the head with a beer bottle, killed
1 male drowned in a puddle
1 male stabbed to death with a bread knife, disemboweled
1 female found beheaded
1 male skewered through the arse with a cane
1 female skewered through the mouth with a cane
1 female got her throat mutilated with a shoved and pulled razor-lined handkerchief
1 male castrated with a bowie knife
1 male ran over with a car
1 male hit with a car
1 male got his head ran over with a car
1 male got his head blown apart with an exploding cigar
1 female got her throat cut with a toy-hidden switchblade
2 females and 1 male poisoned
1 boy stuffed inside a barbecue grill, burned alive
1 female shot
1 girl had her head stomped to a pulp
1 girl stabbed to death with a sharpened plank
1 boy ran through with a lawnmower
6 boys and 4 girls poisoned
1 male and 1 female skeleton seen
2 males shot
Total: 35
Posted by Kaijinu at 9:15 PM