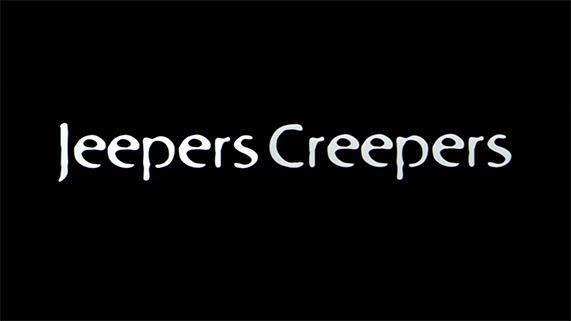 Through the waves of new age horror sparked by teen stars and self- reference, controversial director Victor Salva brought horror back to its roots, giving life to one of the vilest, freshest and most original monster in modern times, with an equally haunting story to boot.

Two bickering siblings (Justin Long and Gina Phillips) were driving along a rural road in the middle of nowhere when somebody in a rusty (and souped-up) truck suddenly attacks them and seemingly tries to run them off the road. (I think I see a bit of Duel in there) Though surviving this attack, they soon find out that whoever was behind the wheel of that attack may have a more sinister plot up their sleeves; spotting him in an abandoned church, the two catches him dumping blood-stained bags down a chute, peeking their interest to return later after the creep nearly runs them off again, seeing if somebody is in need of saving.


What one of them finds down underneath the church, however, was far more horrifying than what he imagined: hundreds of mummified bodies plastered all over the walls, including that of two teenagers who went missing not too long ago. Traumatized, he and his sister drives off to find help, but it soon becomes clear that whatever (and I emphasize the word whatever) is responsible for this nightmare knew they were at its domain and is now hunting them down for a fate much worse than death.

Jeepers Creepers works on a whole lot of level despite some of its out-of-place moments; for starters, I do love the realistic portrayal of Long's and Phillips characters as siblings. Early on the film, we see them at each other's necks, playing a childish game while passing the time, but after finding the their monster dumping bodies and creepily noticing their car passing by, you could actually tell these two are worried for each other, trying to figure out how to get out of the mess alive. It's very rare nowadays to actually see blood-related pairings in horror, which is personally more workable in bringing out the dread of the situation, relating it to the fear of losing an irreplaceable loved one.

But out-staging these two would be mysterious and vicious creature called The Creeper; starting as what could have been just another maniac in a dusty pick-up truck, the Creeper slowly unravels its own otherworldly nature scene by scene, evolving much of the plot from an atypical teen slasher to a creature feature with a lot of teeth. It's ingenious on how little is given to the its origins, only hinting us its goal to exist, which further teases us with a uniquely built mythology circling around fear, body parts and a cycle. Though, considering this explanation is coming from a random resident psychic who tries to save the kids from a fate she dreamt, you could actually see where some of movie's flaws come in.

Looking into its quality, Jeepers Creepers has a lot of munched heart in it; the camera work is one of the best I've seen, lots of shadow based cinematography that help set-up the mood and creep factor of, well, just about anything involving our monster. Gore was fair. Not too red, but a vivisected boy trying to talk in its last minutes and one chopped-off head getting its tongue ripped out through the killer's teeth seems to be enough to make up for any low points for viscera, thanks to their disturbing nature.

The last third if the film is where most of the horror cliches and bad choices clunk together; with a cop-out feel as the Creeper sieges through a police station in search of the siblings, one would simply wonder why our resident psychic didn't just make off with the Jenners while the cops are preoccupied with a flying monster if she knew they were in danger, instead of staying behind and blabbered their doom like a broken record? Of course, we could take in the consideration that the thing was inside the building with them, thus can strike anytime, but yes, some of this last minute theatrics were many parts annoying and cliched.
Still, with the kind of bleak ending this film is willing to offer us, I say can honestly say that the clustered mess we just went through may be worth the sitting on so we can appreciate one hauntingly distressing final shot.

A melting pot of teen horror subgenres, Jeepers Creepers effectively puts an infamous name to a hammy title, immortalizing along with it one modern horror icon that pushed the boundaries of dark imagination and nightmarish visage. A certified gem among us horror fans.

Bodycount:
1 male found disemboweled
A Number of Bodies seen mummified and littered all over cavern walls
1 male and 1 female found beheaded and sewn back together
1 female pulled out from a car, killed
1 male decapitated with a battle axe
1 female killed, presumably shot with a shotgun
1 male found being eaten alive, limbs missing
1 male had his heart chewed out from his chest
1 male seen with missing eyes
Total: 9+
Posted by Kaijinu at 7:34 PM