Not Another Teen Massacre: The Cheerleader Massacre (2003) 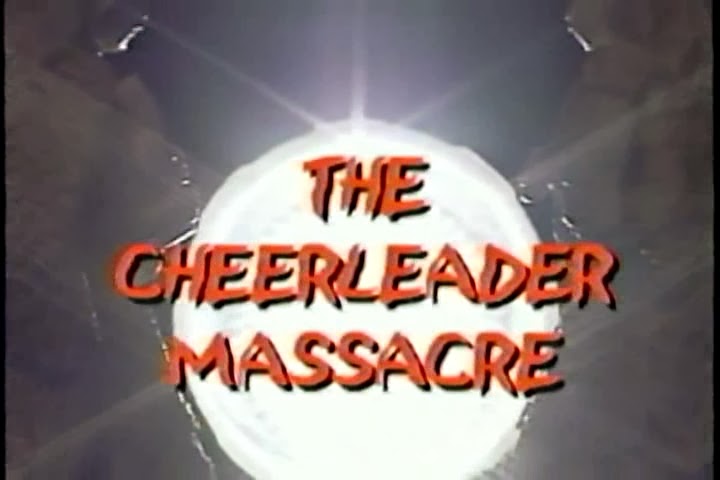 This review is the result of me satisfying my influxes as a completist; I've seen the first three of the Slumber Party Massacres prior to this one and as far as I can tell I enjoyed all of them. (Yes, that includes the much dreaded Slumber Party Massacre II. The one with the musical throw-down that literally came out of nowhere. In fact, I think I enjoyed that one the most!) So, to finish off what I started, I eventually watched this supposedly last entry to the series but apart from a cameo of a Slumber Party Massacre star and a flashback using stock footage from one of those films, I'm starting to doubt that fact.

News of an escaped killer sends local police out searching for him, hoping to prevent history from repeating itself as said escapee, Jeremiah McPherson, terrorized their town many moons ago. Unfortunately, that may become the case again when a group of girls end up stranded in the middle of the road and found shelter from an incoming snowstorm at an abandoned cabin up in the woods. Soon, the girls are offed by an obscured assailant, which hardly used any drills at all. (Hmm, no drills. That's strike two.)

Barely an original production, The Cheerleader Massacre is a sad attempt to do a retro looking massacre film, fueling itself with a high run of gratuitous nudity and sleaze while letting go of more important factors like story and, for a slasher, creative killings. As much as I love big tits and soft arses, this is hardly a sell for a film that should have been focusing on horrible thrills and brooding tension, especially for a movie that kept marketing itself as the third sequel to the original Slumber Party Massacre.

The plot hardly reinvented the tired old story, goofed up by a lot of holes and for being criminally bloodless with most of the murders either implied or very uninspired.  The only thing that shines bright in this (and this is a very small flicker of light) is that the acting's a little decent for a D-grade flick and there's some neat attempt to change around who lives and who dies. The reveal in the end's humorously twisty though, with the least possible suspects popping up in the least expected places.

Would have, could have, should have; The Cheerleader Massacre tries its best to live up to its promise as a worthy entry to one popular slasher franchise but its lack of popcorn goodness and well worth slashing exchanged for nudity made for titillating twelve-year olds stripped this film of any good reason for a viewing, unless you're open for a bad D-Grade slasher film.

That, or you are a twelve-year old.