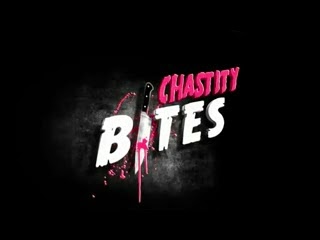 Challenging the horror convention that the virgin always survives in the end, the slasher flick Cherry Falls played a good enough slasher style murder mystery that, while underrated, holds up quite an impression for us slasher fans.

But we're not gonna talk about that film. No, that's going to be a review for another time. Today, we'll be talking about another hack-a-thon that satires the same convention, although more light-hearted and feminist in tone. This is Chastity Bites.

Leah (Alison Scagliotti) is an aspiring journalist and blogger with a working brain but a non-working social life. The fact that most of her articles are controversial not just around campus but around town didn't exactly help her build up a status. Her only bud is one cute face-painted Katherine (Francia Raisa) who, unfortunately fallen head over heels with the new face in town, Liz Batho, a foreign woman who is planning to start a school organization that encourages abstinence.

Well, with a name like Liz Batho and the fact that local women are now missing, all of them virgins, we can tell there's something quite off about Ms. Batho. Leah knows it, but the notoriety she gained as a journalist hinders anybody from believing her so she has no choice but to figure out what's going on by herself and save a friend from becoming the next beauty care product.

Looking into the title, I never thought Chastity Bites was gonna be a slasher. A werewolf, or a vampire flick even, but never a slasher. In fact, I'm pretty sure this is gonna be a vamp flick masquerading as something else since the subject of the film is Elizabeth Bathory, the infamous Blood Countess or Lady Dracula as some might call her, but thankfully, we're spared from another cheap vampire flick and treated instead with a cheap slasher. Not sure how's that good news, but for this blog and this fan, I'm willing to take the chance.

While the plot is sadly unoriginal since, as mentioned earlier, another title already called dibs on the satire, what sets this one apart from Cherry Falls is that there's a bit of odd cheerfulness to the tone despite the slaughter and much of the horror here is lost with its budget and direction. The one dark thing I see here was a scene with a group of mothers willing to kill their own kids just for the sake of eternal beauty but even that's played with a cartoonish banter, losing its impact or sense of dread. Apart from that, its so-called mystery is also a downer since, let's face it, we all know who on Earth "Liz Batho" really is, so we're just waiting here to check how long will it take for them to figure it out and that's never a good thing for a mystery.

Still, I can't get myself to dislike this film; perhaps it's the low-budget charm it possesses, the colorful characters and humor that hits more than it misses. I could compare this with movies like Jennifer's Body where the jokes are delivered in such a new age way, you got to be a teen to understand them (coincidentally, both movies have heroines that had to gradually "transform" into someone harder and grittier to beat up the bad guys) but there's a wider approach to these jokes that anybody from any age range could get it.

Scagliotti did a pretty cool job as our lead; she's like this cross between Buffy The Vampire Slayer and Amy Fowler from The Big Bang Theory: though as nails with a lot of cynicism. Louise Griffiths star in the role of our beloved countess Elizabeth Bathory, with much alluring figure and high class aura that gives this film some standards. Everybody else is pretty spot on (more or less) with their comedic roles, a fun variation to the kind of mean girls you wanted to die in a slasher.

Chastity Bites not may only be the most original or the bloodiest slasher, (ironic to say for a film with a villainess based on a countess that rumored to had bathe in blood), it sadly failed to deliver anything new or thought-provoking. But pass its forced self-satire and tamed feminist atmosphere, it's a fair movie recommended as a starter piece for Horror noobs and curious types.