Not sure if it was smart to franchise a movie seven to eight years later since its release but you'll never know if some people will still remember a screaming, mauling torso that is Belial. Frank Henenlotter, the mad mind behind the original Basket Case (1982) (and Frankenhooker (1990). And Brain Damage (1988)), weaves up a weirder follow-up to his gritty little early 80s creature/slasher hybrid, upscaling it to the point of sheer strangeness and comical proportions.
﻿ 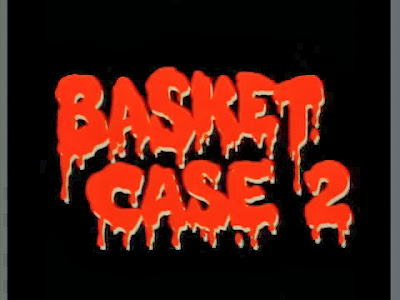 Continuing straight from where Basket Case (1982) ended, Duane and his surgically removed, homicidal Siamese twin Belial somehow survived their fatal fall and is taken to a hospital to recover. Belial no soon after wakes up, fully healed, and quickly controls his unconscious brother telepathically into sneaking them out only to be rescued by a strange matriarch named Granny Ruth and her granddaughter, Susan.

Turns out Mrs. Ruth runs a home for freaks like Belial and she's more than interested in taking care of the twins, giving them a place where they will feel welcome and even loved.

For Belial's case, love seems to wormed its way to him somehow when he finds a "beautiful" freak just like him. When Duane finally comes around, he's a little uneasy with this new development to his already strange life but nonetheless decided to stick around for a while when he falls in love with Susan, as well as finding out along with Ruth and the rest of the freaks that someone is snooping around to uncover them.

Granny plots to take revenge on those who tries to exploit the freaks' existence and she will sic Belial at them with a mauling fury.

While the original exploited the concrete jungle of New York's slums with blood and violence that certainly fared well, Basket Case 2 took the franchise to an entirely different direction; though the first film has its fair amount of cheese, it still has that dark and serious exploitation feel that's gritty and downright disturbing at times. This sequel, however, decided to throw it out and replace it with a more cartoonish and comical tone as deranged characters, exaggerated deformities and silly development turn a promising and fairly original slasher into a black comedy with gore and bodycount.

Majority of the movie focuses on the brother's plight after their exposure to the outside world. They became a celebrity of sorts over the media for their notorious killing spree and this begins to take effect on them differently; Duane wishes to leave and start his life anew away as somebody "normal" while Belial wishes to stay and be with his new family. The story tries to move further into the matter but the eccentric tone really kept it from going anywhere. More or less, "colorful" deformities these freaks have is a clear indication that we're no longer watching a real horror film until the last half hour where people started to get killed.

I may sound disappointed, probably am, but I will give Basket Case 2 this: it's still crazy fun. As a follow-up to a bloody and offbeat horror movie, it fails, but as a deranged abnormality that tries to be fun as it is silly, it kinda works. The acting is a lot better (save for Kevin Van Hentenryck. Might just be his character, though. For a guy who's getting tired of living with a bunch of freaks he sure acts like one) and the effects are eye candy especially if it meant a better looking Belial, a house full of rubbery individuals and one strange scene that involves two torsos humping each other's sides. (not sure myself how that works, too) The murder scenes are kinda tame but a few of them are quite memorable.

Stranger than before, horror is almost lost in this unnecessary follow-up and it makes you wonder why exactly this exists. And yet here it is, Basket Case 2, slightly more unhinged and still being messy and messed-up.

Bodycount:
1 male strangled
1 male mauled offscreen
1 male mauled to death
1 male found with his mouth ripped apart
1 male had a portion of his face ripped off
1 female falls to her death
1 baby killed in fall
Total: 7 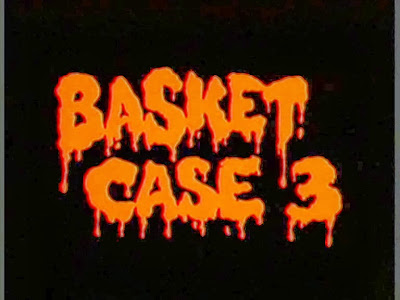 And the messed-up story continues. Only this appears to be a even weirder than the last. How do you even do that?!

Last time we saw Duane, he went crazy after finding out that Susan, the new girl of his dreams, has a snapping reptilian of a baby fetus living in and out of her womb, accidentally kills her and then sews Belial back unto his side claiming that they're together again. (Answering your questions, yes, that counted as a spoiler, and no, I didn't made anything)

A few months went by since that fateful night, it turns out Duane was subdued somehow and had Belial safely removed from him, after which their new caretaker Granny Ruth placed the now crazy Duane to a quite room built into the house. She explains to him soon enough that he's going to be an uncle as Belial's deformed love Eve is now pregnant.

Obviously after his stunt with Susan, Duane's not too well accepted by Belial's new family of freaks by the time they allowed him to be brought out and see his brother. Thankfully, that didn't stop them from tagging him along as they visit a family friend one road trip away from them, a doctor who specializes on treating freaks. One silly sing-a-long later, they reach their destination and Duane's silly antics unfortunately attracts the attention of a local girl whose father is the sheriff. When the local police force soon finds out that the freaks responsible for the Time Square murders are around, they make haste on capturing Belial (or at least the next best thing, his babies!) for reward money.

Paths are soon crossed and this time Belial might not be the only one standing up against those threatening his family. 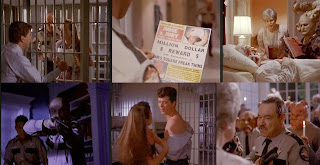 A little better in terms of eccentricity than the previous entry, The Progeny gave a healthier share of body weirdness and raunchy comedy that further staples this franchise's decent into black comedy territory. New freaks are introduced and funnier scenes showcased them singing a lovely song about personality, partying to celebrate the birth of Belial's babies and them finally making their presence known in public by ransacking (and placing a series of orders) at a local fast food joint. If that ain't enough, we also have a weird dream sequence Belial had showing his sophisticated side and a love for big tits, and climatic fight that kinda reminds me of that between Ripley and the Alien Queen in Aliens (1986).

Then there are the kills; probably the best in the franchise, The Progeny brought up some really bizzare murders as their cartoonish style bought up one hellish massacre that is both juicy and laughable.

My only complain here is that there isn't much characters here to relate to; Granny Ruth will be an exception to this claim as this character shined brighter in this sequel than she did in her debut movie, but Duane's been reduced to a bumbling fool who's trying his best to make up for what he did to his twin brother, and much of the "normal" characters are all jerks. Although seeing the message given at the end of the film, guess this was intentional and well fitting to the non-serious tone of the sequels.

While I'm still wondering the necessity of these sequels to the original, I'm willing to overlook this fact as long as I'm having fun watching them. Might be a bit of a rocky path to start with but it's closes the franchise quite well with this wild and imaginative finale.
﻿﻿
Bodycount:
1 female shot with a shotgun
1 male had his neck crushed until his skull nearly pops out
1 male bitten on the face and yanked until beheaded
1 female shot with s shotgun
1 baby crushed
1 male had his head twisted to the back
1 male killed with a metal claw
1 male killed with a metal claw
1 male mauled to death
1 male mauled on the face
Total: 10
﻿﻿﻿﻿
Posted by Kaijinu at 5:41 AM