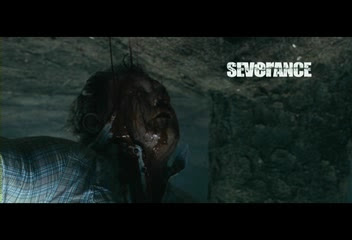 The early 2000s was a pretty good year for European horror: Dog Soldiers brought some spark back to the werewolf sub-genre, Shaun of the Dead pays decent tribute to classic zombie clichés and The Descent got creative by bringing us a new reason to be afraid of the dark. As for slashers, those years were a Godsend: Creep (2004) had us crawling through the underground subways to meet a deformed abortionist, The Last Horror Movie (2003) twists and turned our fave sub-genre against us and Ripper (2001) (despite my unfavorable views to it) somehow gathered its own set of fans.

Coming from the same guy behind Creep, Christopher Smith forges another slasher in 2006, dashing in some witty British humor and a sweet action film backdrop that may not reinvent the sub-genre but entertains either way.

Opening in media res of two Russian women and a fat bloke being chased by someone in the woods, the gals fall into a pit trap and tries escaping the hole by stripping, while the other porkier fella gets snared and disemboweled by a husky looking hand clutching a hunting knife. Fun times.

After that cold opening, we then follow a group of seven co-workers from the European sales division of Palisade, a defense military arms corporation, on a bus trip to a weekend team-building "Luxury Lodge" deep into the Matra mountains of Hungary. Early on this scene, we can tell who's who that are biting on the other's leg and those who are trying to make the weekend work, a fact soon to be tested further as, thanks to a fallen tree, the gang is forced by their non-English speaking bus driver to walk all the way to their destination and finds out that said lodge was more of an isolated dusty old cabin. (With a free pie!)


Over the course of a single evening, the colleagues settle in and share conspiracy stories about their lodge after finding Palisade papers indicating their involvement on war atrocities at Hungary some years ago. Of course, most of them sees this as all bollocks until, later that night, one of them spots a masked man spying on her room and signs of somebody's presence being nearby.

Rattled, the group plans to leave the following morning, first attempting to find a way to callback their bus driver while those that are left behind decide to continue with their weekend plans either way. But after finding their driver mutilated and left for dead on a stream nearby and one of their pal's leg gets caught and chopped off by a placed bear trap, the office outing just got bloody as someone with a deep hate for Palisade is out to snuff them off one by one.

While most examples of horror comedy often lose track of their flow and become an uneven mess, Severance managed to keep the two genres stable and fairly distributed as a tone through out the plot. The only thing that matters now is how well you understand and take in the kind of humor this movie have; the comedy here relies on dry wit and dark touches as people die in very brutal manners such as chopped off heads, incineration by flamethrowers and one nasty anal stabbing, and yet laced in with some comical backlashes that can't help but chuckles at such as exchanges whether it's okay to leave what could be a dying man to save themselves or a scene where a freshly decapitated head smiles at the fact that his theory about beheadings gets proven true.


Mind that this is all done without exaggerating the gore and over-the-top lewdness that commonly loom over most slasher-comedies, thus breaking away from the usual clichés which proves to be a refreshingly bold move. Instead of loud annoying teens, the soon-to-be victimized are all working adults played by choice-cut stars that may have appeared on a UK broadcast before, but for viewers who're not familiar with English programming, these casts may as well be unfamiliar yet praise-worthy faces. (I recognize Richard as Tim McInnerny though, from Disney films and an episode of the revived  Dr. Who series) The roles they play are fleshed out and (for most) likable, if not entertainingly disposable given their fates thanks to a really strong and realistic script (which reminds a lot of folks of the comedy show The Office) and relatable performances.

Slicing its way in a quick-cut pacing and harboring a decent twist for a slasher villain, or villains, Severance has a distinctive flow that gets better as the movie forges further. Some hints of action and survival elements are thrown in the near end while still retaining some of the comedy and even brought up some interesting final characters. In the end, Severance can be seen as an slight improvement of the director's earlier slasher, and when I mentioned slight, I meant Creep was a great movie, but this is better! (I'm a big fan of Creep. I dunno but that movie works for me almost as good as Severance did!) Though some may complain that the jokes are a little too dark or may have dwindle down the cathartic aftermath of each murder, fans of smart humor and bloody good backwoods horror will sure to have something great to remember thereafter.

And may said something is more than a gold-filled tooth in a pie or a bloody severed leg in an icebox.

Bodycount:
1 male slaughtered with a hunting knife
1 body seen buried underneath a mound
1 male found slaughtered
1 male beheaded with a machete
1 female set on fire with a flamethrower
1 male flayed alive with a carving knife
1 male shot on the chest with a shotgun
1 male ran through the back with a machete, shot on the head with shotgun
1 male shot with shotgun
3 males blown apart by a land mine
A number of passengers in a (passing by) commercial jet gets blown up with a rocket
1 male had his head crushed with a dropped rock
1 male shot dead with a submachine gun
1 male forced to sit unto a stabbed hunting knife to the arse
1 male shot death with a submachine gun
Total: 16+
Posted by Kaijinu at 10:53 AM