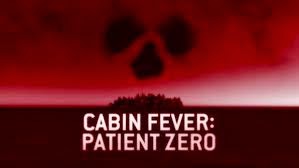 I've been bored and disappointed in franchise entries so many times that I've learned, in order to keep myself feeling sulky at the end of a potential bomb, to lower down my expectations every time a sequel or remake happens. And yet, you can't stop but feel a bit of hype whenever you learn that a good franchise (or at least ones you like) is gonna spat out sequels to keep you entertained and loyal, so my big feels for Cabin fever: Patient Zero, a sort of prequel that was marketed to be explaining origin of the virus, was to be expected. But will these feels be worth it?

First, no. It didn't explain the origin of the virus. It kinda tried, but all we get to find out is that some random American vacationing at a Caribbean island with his family caught it first and we see the aftermath of this infection in the opening credits. Next thing you know, this guy is being experimented on inside a secret medical base located in said island, hoping to culture a vaccine or even a cure. But being their guinea pig begins to deteriorate the man's sanity and soon, he found a way to spread the virus as an act of revenge for keeping him locked up against his wishes.

All the while, friends Marcus, Dobs, Josh and Penny are vacationing on the same islands, unknown to them the real horrors going on behind the warm sun and sandy beaches. That is until one of them gets infected, and then another, forcing them to look for help deep into the jungle only to find the now near-barren and diseased base, wherein the last of the living (and possibly infected) scientists struggle to either find a cure or die trying.

The way I see this franchise, it's a little bit of something for everybody; the first is a backwoods horror that juggles a slasher plot with psychological horror and gruesome gore, while the second film was more of a splatstick with loads of retro-esque tone and even wilder splatter. Now some might find Patient Zero as an improvement over the last entry, harking back to the semi-serious tone of the original, I would bought it too if the execution wasn't so terrible.

What makes the first two Cabin Fever films so fun and intriguing is that the virus attacked groups in the least likeliest of places. No one would expect a flesh-eating disease outbreak around a log cabin or during a high school prom night, but around a medical base? That just kills off the tension. What's even worse is that the movie really took its time to get moving, spending an entire hour with people arguing whether its ethical to keep a man locked up inside a glass case while they casually take blood samples as if its nothing. This didn't help build any sense of tension or development to any character save "Patient Zero". Even our vacationing leads barely made an impact, they're simply just there, hanging around scared and confused.

After a while, the film did get to the gooey bits; zombie-like infecteds out killing people and dying in the process, chewed out lips, infected catfights, death by dildo (it's less silly as it sounds), all of this and more at the last half hour. Unfortunately, by around this time I'm nearly bored waiting for something really shocking. Yes the gore is top-notch, I'll give the movie that, but I was really hoping to see something a bit different from fragile faces and people vomiting blood. We have seen all this already. (Could be just saying all this cuz I'm a big fan of Spring Fever, but I'm just saying...)

Can't diss Patient Zero completely seeing this is just the first half of what will be a back-to-back shot entry to the series. The other title, Outbreak, will follow directly from where this one ended so perhaps there could be more in the end? I sure hope so. For now, I'm barely passing this one; could it have done a better pacing and direction to go with the good gore, I'm sure this fever would've caught a decent amount of fire at least.