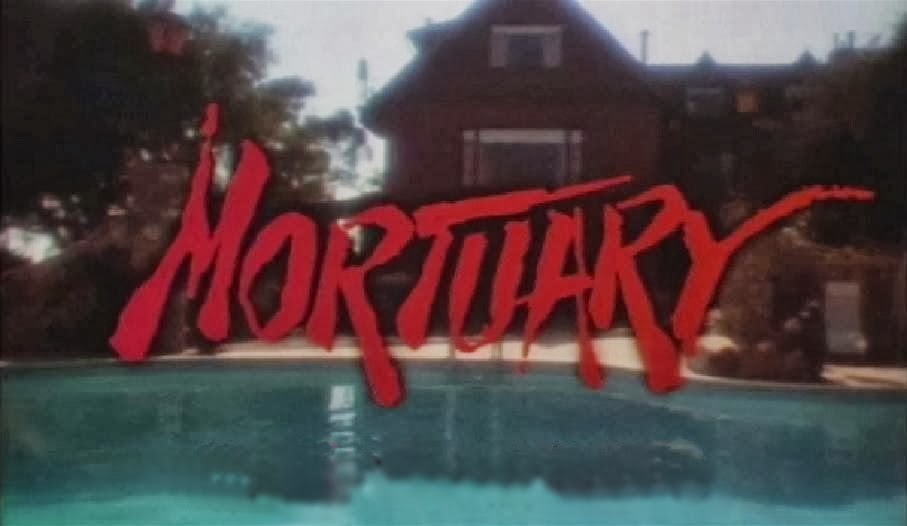 Mourning over her father's death at the hands of an obscured assailant with a baseball bat, Christine (Mary Beth McDonough) now has issues: apart from her sleepwalking habits, she also has to deal with a mother who appears to hate her a lot and a black hooded figure brandishing embalming needles that keeps chasing her.

She would believe she's losing her mind if it wasn't for the strange coincidence that her boyfriend Greg is now missing a friend. Tangled in this web of intrigue is a local mortician who maybe leading a Satanic Mass, and his bewildered son who merrily skips through his mother's grave after putting flowers on them. Could one of these people be the killer? Or is Christine just loosing her marbles?

The story of Mortuary juggles a fair amount of cheese and mystery, its cheddary nature performing a lot better than the actual plot itself provided we get hammy roller-blade disco scenes, hammy scripting and a really dry ending that looks something like a cross between Psycho (1960) and Happy Birthday To Me (1981). It's never that scary for this matter of a flaw but it did manage itself to be a little intense at times and it's charming given that you're into off-the-wall blurting, sleepwalking girls in nighties or is interested in seeing a young Bill Paxton do an impression of a demented Peewee Herman. Seeing that a supposed Black Mass resembles Musical Chairs that built up to nowhere, you would really think twice to see this as a serious movie.

With all this strangeness going on, it kinda helps us go through the entire movie without being that bored with unproductive character development or waiting for the next stalk and/or kill scene. Mortuary's particularly dry as a slasher given its sheer focus on figuring out who the mad stabber is but, nonetheless, the chase scenes do made it worthwhile especially if your killer looked a lot like Captain Howdy from The Exorcist.

As weird as it is, Mortuary can be a fun movie when it fits your mood. Ignoring its unusual marketing (the video covers and one of its teaser trailers made it look like a zombie film), the film could be a choice addition to your collection, depending solely on how well do you take in your ham and cheese.