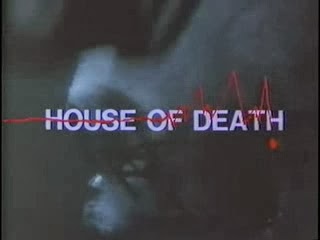 A standard slasher can be a darn enjoyable one if it plays its cards right.

Some group of teens volunteering for the town fair that weekend decided to hang out later that night in the woods for some rest and relaxation. What they didn't know is that a psycho is loose within the woods, already murdering a kissing couple by garroted their necks together and it looks like they might be next on his cutting list as he corners them inside a dilapidated cabin.

House of Death may look like just another slasher in the woods and, for all honesty, it kinda is. What do sets this title apart from most is that it did took its time to build some likable cast and a good climax, even if the first two-thirds of the film could test your patience.

After the double murder in the opening act, we spend the next hour or so watching our would-be victims have fun running and playing around the fair, blissfully unaware of the floating dead couple and that one teenager being shot with an arrow and smothered to death with a plastic bag. Not exactly very slashery unless you count bouncy castles and high strikers frightening but it did get into familiar footing once night falls and the kids venture into the woods.

Spooky stories are shared and old creaky houses are found, it soon leads up to the group finding one murdered friend followed by a series of machete madness. It's this payoff alone that made the wait worthwhile when wild assortments of hacked off body parts and clever set-pieces ravaged our victims one by one.

Direction might be a little faulty, thus goes some of its some points for plotting (the killer's motive is as randomly cuckoo as ever) but House of Death exists merely to entertain. True it holds nothing compared to heavy weights like Friday the 13th (1980) or even The Burning (1981), both of which also took their time brooding their way to a massacring climax, but on its own, its a gleefully fun dead teenager flick that saves the best for last, making sure the experience is very rewarding for those who thought twice on ejecting this movie from their players.

Rented or owned, this one is a welcome lookie-look for slasher fans and completists alike.