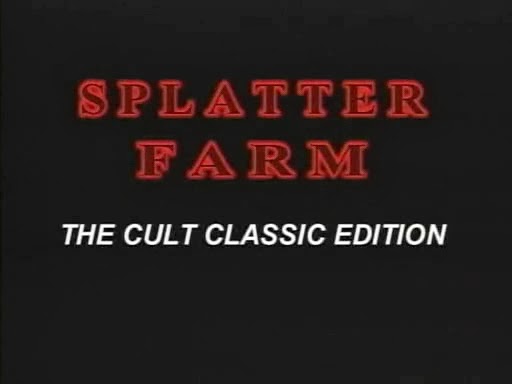 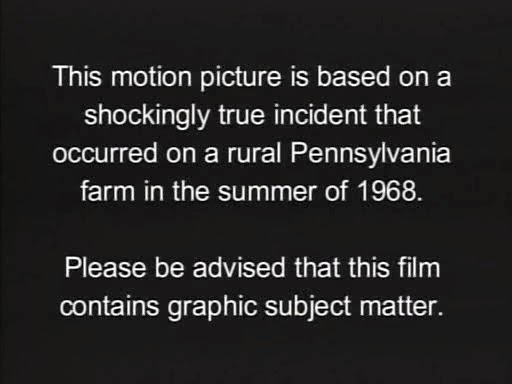 ﻿
Okay, so I stumbled upon this movie one bargain hunting ago and bought it without any idea what to expect. Apparently, this is one of the earlier films made by the Polonia Brothers, prolific contributors to the DIY horror movement who introduced multitudes of horror and scifi titles shot below a budget, almost all of them I never even heard of. (Hey, I got a life outside horror!) After seeing this movie, I can now safely say the entire experience have surely put me off their radar. Forever.

Twins Alan and Joseph are visiting their aunt when they begin to notice something strange between her and her hired farm boy Lacey. Could it have something to do with those bloodstained bones in the barn, literally hammered horses, Auntie's little habit of hypnotism and the fact we just saw Lacey dismember a body before giving himself the jollies with a severed hand in the opening?

What do you think?

Made to shock its audience, what Splatter Farm did to me is entirely the opposite: It bore me. Dead bore. Might be the bad quality of everything from audio and lightning to the tediously prolonged pacing and really weak acting that did it, things I don't normally mind knowing the matter that I'm the kind of guy who gave cheap as chips slashers like Blood Cult, The Nostril Picker and Truth or Dare: A Critical Madness a passing remark. But I swear to you all, I was this close to drinking a bottle of pesticide by accident due to me being drowsed into sleeping on how bad this film is. (That could have been a more interesting experience compared to the movie now that I think about it!)

Not sure what to say; it tries its best to shock us with taboos and upsetting images such as random animal murders (Offcamera. Geez), incestual rape (implied) and sexualized violence and torture (plenty but hardly shocking due to budget) but with uninteresting characters and a deadpan tone, I'm in a complete daze in the end and I failed to see the point of it all since I hardly cared for anyone in the story. The only aspect of the movie that reached out to me is the gore, which was gooey fun to look at in the same level of Truth or Dare: A Critical Madness (1986). So will gore works save this film for me, then?

Please, I'm not that shallow.﻿

Strangely, the movie found itself a cult following and even gets re-released in the new millennium with some of its more ridiculous scenes edited out to improve the film. Not sure which scenes they fixed or how better it is now but I'm not too excited to involve myself with this garbage so I'm just gonna leave it to the fans to find out. (Whoever you are)

See it if you want, dear reader, but if you're gonna stone me for hating this, then I'll die a stoned man! This movie sucks in my opinion and I ain't going back for another round!

Bodycount:
1 female dismembered with an axe
1 male eviscerated with a knife
1 male beheaded with a scythe
1 male axed on the face
1 male tortured and impaled with a pitchfork
1 male got his head blown off with shotgun
1 female blown apart with dynamite
Total: 7
Posted by Kaijinu at 6:17 AM