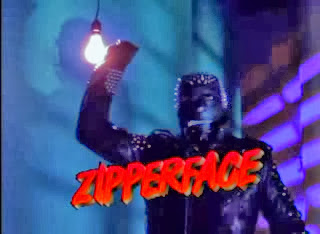 Well. This is certainly.... Different. For a masked slasher.

One part slasher film, one part police drama, Zipperface has a female law enforcer promoted to Detective after heroically saving a kid from a hostage crisis. And her first assignment? Investigate a series of hooker-related murders, apparently committed by someone with a fetish for leather gear.

Now, I'm just gonna breeze through this since, frankly, Zipperface really didn't do anything for the horror sub-genre aside from knocking it back a decade or two.

For starters, I'm slightly disappointed with the lack of any real action here involving the titular murderous (and literal) leatherface, with the movie spending most of its time following our lead in her mission to capture her perp as she uncovers some serious plot twists and red herrings.(which somewhat involved learning strip lessons) Unfortunately, whenever the big guy himself did show up, the movie's zero-budget and absence of direction left his scenes and murder sprees as dry as an English muffin for a slasher film. Tis' a shame as, with the killer's bondage inspired get-up, they could have let this mother slash his way through casts in sleaze but all they did was waste a perfectly good killer in a lamely executed horror-crime drama hybrid.

Everything else seems to trail along with the budget; overacting cheap actors, plodding pace, bad lighting, mediocre set, cheap camera work, and surprisingly dry nudity for a film about a killer gimp! The twist reveal in the end does come off rather surprising but if a good portion of the movie seems to be just lazing around, pretending to be as scary as it imagined itself to be, then I really don't see much of a point for it.

Bodycount:
1 male shot dead
1 female had her neck broken with whip
1 female gets a throat cut with machete
1 female thrown off a building
1 female strangled with chord
1 female hit with a car
1 male found with throat cut
1 male shot through the head
Total: 8
Posted by Kaijinu at 5:38 AM