Can you believe this Blog's been running on for two years now? Though, I have to admit this year's productivity is slower than before due to me working, but I managed, and this site's still up, giving you the freshest reviews to popular, not-so-popular, obscure and relatively rare slashers and bodycounting thrillers! 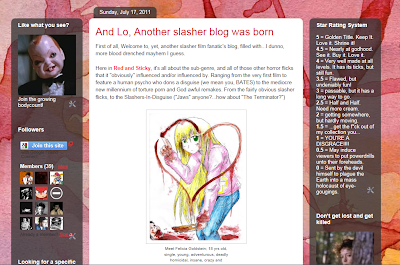 But for this year's birthday post, lemme do some Shout-Outs to my brothers and sisters who took the time to drop by every now and then;

First, to my bros, Craig and Maynard! From Let's Get Out of Here and  Maynard's Horror Movie Diary respectively, my two bros over the web who are never a complete bore with their wide, wide scopes of reviews, feedbacks, insights and beards! But mostly their beards!

Second, goes to the lovely lady of the night, Michele from The Girl Who Loves Horror, the adorable lass in glasses who makes honest and insightful reviews and comebacks, and has the special ability to look cute in glasses!

Then we got fellow Slasher bloggers Hudson and Joaquin Gonzales from Vegan Voorhees and A Slash Above respectively! Hud here's the more interactive one, and probably a better reviewer cuz he's pretty much straight to the point, (I prefer dramatics~! Monami~!), though Mr. Gonzales still entertains back; plus the guy's kind enough to offer me a DVR of Study Hell. (Though the exchange didn't happen. I have nothing rare-ish to exchange...U3U pfft)

Lastly, we got our new friend Lord Crayak, who I believe to be the admin behind a wikia known as Horror Film Bodycount Wiki, which is a good way for me to make sure my own bodycounting is accurate. He sortah frequents my blog and gives a lot of great info on most of the movies I review! I'm deeply appreciative of that as you can tell!

And of course, YOU! YES! YOU! THE ONE WHO'S PROBABLY READING THIS RIGHT NOW! Thanks for dropping by to this little labor of blood, sweat, tears and other bodily fluids that I'm willing to give up for some love and attention! Your views is the reason I'm still doing this, and the fact that I just love hearing myself talk! lol

So, yes, this is here to another year of Bodycounting! Slashers! Serial Killers! And everything else in between! 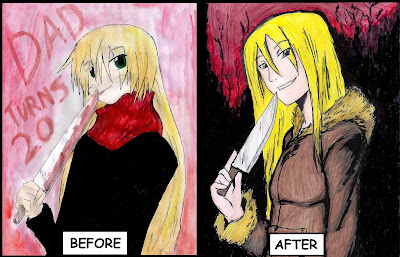 By the way; isn't it weird she used to look like that? My skills are finally maturing! 8D
Posted by Kaijinu at 2:47 PM

Email ThisBlogThis!Share to TwitterShare to FacebookShare to Pinterest
Labels: Badly Drawn masterpieces of mine, Random Stuff