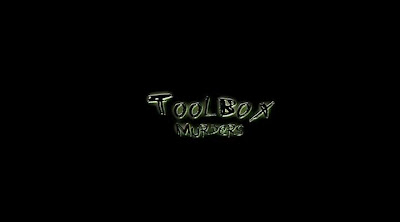 Lately, Tobe Hooper's works seem to be in an unbalanced creative streak; at the dawn of the new millennia, he directed a wide array of horror flicks that lack any sense of taste, style or memorability, such as that one title with zombies that melt with salt. I think it's called Mortuary (2005). It was atrocious.

Thankfully around 2003, he did manage to channel his finest camp and creep for the time being with this gorier redux of The Toolbox Murders, a 1970s cult hit that I never got around enjoying, but am happy to see to get this revamp.

In Hooper's take, we set site at a rundown Hollywood hotel Lusman Arms, where initial renovations are currently being done to make sure the 1920s building is still standing for another decade or two. Newlyweds Steve and Nell Burrows just recently moved in during the wreck much to their dismay, but they try their best to look past the paperthin walls, the lightning that doesn't work and the canisters of teeth hidden in the cracks. Further complicating matters within this "historical" building is when Nell accidentally calls the local authorities on what she thought to be a murder in process, only for it to turn out as two guys rehearsing a scene. Now receiving the ire from most of her neighbors and the landlord, it isn't surprising that no one believes her when she begins to point out the number of people disappearing within the hotel lately.

While the original Toolbox Murders was more of a slasher-cop drama hybrid with unimaginable amount of corniness, the remake embraces the bodycounting format in its fullest, live up to old school slasher carnage by giving its viewers a wide array of brutal gory kills while, at the same time, delivering some nostalgic cheese along the way. This pretty much make the film it's own kind of monster that takes very little from the original, a definite splatter flick made for fans of decent bodycount movies as it has every aspect that makes a hack-a-tho movie good such as the nightmarishly unusual plot, weird and colorful characters (even those with small parts), an awesome leading lady played by the one and only Angela Bettis, and, of course, the bloody stuffs. 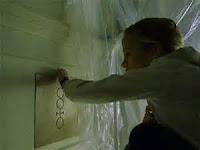 Frankly, I never knew Hooper can do a gore movie this violent; we got brains hammered open, spines severed with bolt cutters and, a personal favorite, a head sliced in half that harks a similar scene from Scott Speigel's Intruder (1989). Better a fact that these kills are also committed by one savage looking killer dubbed "Coffin Baby", whose obscure background has to be the first for a slasher killer. He has a bit of Leatherface in him (when unmasked, a sorta tribute by Hooper to his own masterpiece, Texas Chainsaw Massacre (1974), and some familiarity within black magic, something I wished they explained a bit further aside from strongly hinting he worships some strange symbols that may have granted him immortality and extraordinary endurance.

I find very little flaws to speak of here; the scripting has its tint of quirkiness, though I can easily disregard that as Hooper is known to create weird and unusual characters that sometimes defies stereotyping. Though, there are moments where the film tends to slow down to keep the flow balanced with the decently sizable number of murders. There's also some parts of the movie where logic is disregarded a little too much even for a slasher movie, such as the killer's surprising ability to successfully nail gun a victim to the ceiling without breaking much of a sweat.

While far from a perfect slasher, Tool Box Murders (2003) is undoubtedly one of the finer releases at its time. Funny enough that it seems to be released during the same year James Wan's SAW was, hence making it one of the few movies to welcome back detailed viscera into the screen, see it as a sign that this film was destined for horror fans and gorehounds alike.

Bodycount:
1 male seen killed, mentioned knocked out of window and fell to his death after getting electrocuted by junction box
1 female brained to death with hammer claw
1 female shot to death with nailgun
1 female gets powerdrilled through the head
1 male killed offscreen
1 male had his head sawed in half with circular saw
1 male had his face eaten away with powdered lye
1 male stabbed on the back with bolt cutters, spine cut
1 elderly male dies from shock
Total: 9
Posted by Kaijinu at 7:56 PM