Oh Charles Band, how I miss those years when your movies were good. Ever since you departed from Paramount Home Video, all hell broke loose and we have to sit through shit like this over and over again...

There comes a time in a fan's life where he has to accept that those that once so loved cannot stay good for very long. I learned that through Full Moon Studios the hard way when they began making Puppet Master films with string puppets of all things, thus killing my fandom and faith in any further Full Moon releases. I tried some of their later works, and they all fall into obscurity for my eyes; this here reviews are from one of the few "popular" movie franchise Full Moon spawned out of hell itself, and after seeing them, they almost killed my other plans to see any more of their movies from there on. Almost.

So, without further delay, I bring you the stale cookie that is The Gingerdead Man! (I'll probably do each movie with short reviews. I don't feel really excited doing these..) 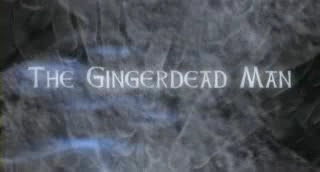 Starring none other than the equally hard-to-be-taken-seriously Gary Busey as the titular creature Gingerdead Man, the film  opens with Busey's character Millard Findlemeyer, the human version of this bad cookie, in media res on a robbery/killing spree in a diner. Some of the patrons includes the brother and father of our lead, Sarah Leigh, who ends up getting shot and stabbed n an attempt to subdue the maniac. After failing to kill Leigh, Millard ends up deep friend under an electric chair but not before swearing vengeance on the girl for ratting him out.

Years after Millard's arrest and some time after his execution, Sarah finds herself in a predicament where she can't move on from the nightmare, thus affecting her bakery business, something that isn't going any better with her mum being drunk all the time and the owner of a big shot, commercialized bakery on the other side of the street's been forcing her to shut down and sell the store to him. Distraught but hopeful, Leigh goes along with her job to pass off things and, after a strange parcel containing some "special gingerbread mix" shows up from the back storage, dropped by a woman in black, she decided to use it to bake some gingerbread men...or man.

A freak accident involving a bitch-fight between Leigh and Lorna, the spoiled daughter of her rival then broke out, electrocuting the cookie ala Frankenstein monster, bringing The Gingerdead Man to life! Can anyone say "what?"

So, instead of doing the sensible thing of leaving the store with their asses intact, Leigh, Lorna, Lorna's current boytoy and Leigh's ex Amos, decided to stay and try to capture the homicidal baked good in hopes of selling it, "cuz there's plenty of dough people will pay to see a talking cookie". (And then he snickered "Dough, cookie. hehe". Yeah, yeah, ass-wipe, we get the fucking joke...) Thus, ending up with a bodycount (surprisingly) and two other "harm counts", where in people get picked off but aren't really dead. Cheat.

An hour and a ten minutes felt like forever with this movie, with the first Gingerdead Man kill happening after 30 to 45 minutes into the movie, spending most of its prior time yakking about how one girl is so traumatized about all this and that she thinks the killer cookie's the undead Findlemeyer out for revenge. Of course, she's right, but we pretty much know this fact as this has been done ridiculously a lot! Worse, by the time the killing starts, we have to settle with tame murders, awfully wooden (and unbelievable)  reactions to all of the odd things going on (would you approach a talking biscuit? I mean, would you REALLY?) and one out-of-the-blue possession angle just for the sake of it. (Why, for all things, would you even take a bite out of a possibly demonic cookie?! THE THING IS MOVING, FOR BUDDY-JESUS' SAKE!)

The idea's cheap and too strange even for a Z-flick, you can honestly tell that the production for this one is really thinning down as it shows from every aspect such as scripting, lighting, set stages, props, effects and yes, even the Gingerdead Man himself, who looks really like a hand-held puppet with with immovable parts. Full Moon sank real low with this one.

Bodycount:
1 female shot on the head
1 male shot
1 male stabbed to death with switchblade
1 male implied to be executed via electric chair
1 male smashed against the wall with car
1 female stabbed on the head with thrown hunting knife
1 male shoved inside an oven, burned
total: 7 Well, for some reason, this happened; a sequel to what could be one of the worst pint-sized killer movie ever made, promising more laughs and blood. They were actually right about the blood, but laughs? Ugh...

The last shot from the first Gingerdead Man movie had us seeing more gingerbread men supposedly baked from the same mix that created the first "batch". So we follow the adventures of one of them, somehow ending up in a low-budget movie studio that kinda lampoons Full Moon Studios itself (call it sincerity or just biting the hand that fed it), where he hatch an idea to repossess another human's body so he can escape his stale and crumbling cookie body. (Child's Play anyone?) Just by luck, a spell book prop happens to had fallen right in front of him and found a spell that could allow him to do just so. Putting his faith in a book that's probably made by nerds like you and me, he began to kill off victims for his spell (and almost works!), with the only one stopping him is the studio's young and awfully enthusiastic new owner, and his friends. (As if they can do anything, but oh well...)

The good thing about this movie is that it finally got the bodycounting rolling, with some fun and silly kills that's made for Z-film trash, an awesome opening song (which sounds awfully familiar...)and a nice set of rack thrown in.
We also have some familiar faces here for some odd reason such as make-up maestro John Carl Buechler and scream queen Michelle Bauer; Gary Busey had left the voice acting job to another, but I think it's for the better, the Gingerdead Man is still the same cheap, ugly hand puppet thingie that moves around as if someone's wobbling it.

To be honest, despite the satirical attack on Full Moon Studios, the campier and livelier plot comparing to the first and more bloody action, the film's budget was still a big issue for this film, as you can still tell how low dough was spent on this film. There's still also the pacing issue, uninspired dialogue and wooden acting that distracts me a lot, plus the really lame and uber-cheap ending that's been done for the sake of the title.

A little better, but not even near of something I wanna see again for a second time. For hardcore Full Moon fans only.

Bodycount:
1 male seen stabbed repeatedly with knives and decapitated with chainsaw
1 male sodomized with iron hair curler
1 female repeatedly knifed through the back
1 male knifed on the gut
1 male incinerated by a working prop laser (WTF?!)
1 male stabbed to death with knife
total: 6 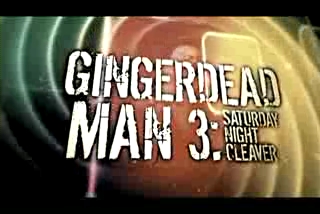 Third times the charm? No, not this time...

For some unexplained reason, this third entry to the cheap, tiny-terror movie had the Gingerdead Man imprisoned in a Maximum Security that specializes in homicidal baked goods, which also houses some other unexplained living confectionery treats and a time travel research center. (American Taxes go to these?) In a spoof of The Silence of the Lambs, we got a "rookie CIA agent" interrogating the cookie of the reasons why he's so damn evil. (As if anybody of his kind has a reason) No soon after, the center suddenly got attacked by a group of "Animal's Rights Activists", who then proceeds to free all imprisoned baked goods inside, including, of course, Gingie. After running around, Gingerdead man found a room with the time travel machine and, well, decided to escape using it.

Ending up in 1976, The Gingerdead man found himself trapped inside a roller rink that's about to be closed down due to the owner's negligence, but still boogieing on as these retro kids wanted to go out with a bang. Helping her aunt owner with the closing is Cherry, a "gifted" (as in "Carrie" gifted) girl who's socially awkward, but skilled in roller boogie. Through the help of a kind clerk, Randy, who also became her romantic interest, she eventually overcomes her shyness and rise as one of the candidates for the Roller Boogie Pageant 1976, that is, unless the four year winning champ has anything to say about it. All the while, The Gingerdead Man decided to go around and kill some people since he's stuck here for the moment (his time travel remote's been taken by some brats, mind you); could this spell out disaster for the time stream? Will Cherry win the pageant without being humiliated by her rival? Can her auntie accept who her niece really is? Who on earth places a tub of Hydrochloric acid in a car was?

There's a bit of an improvement with this entry here; the Gingerdead Man puppet actually looks more livelier here and his killing spree is indeed a fun one, in a braindead, nonsensical manner. The plot is sillier than the two combined, but I do feel the enthusiasm and some effort to make this movie work. What didn't work here, is that some of the effects are still pretty dodgy, and the humor is hanging dependently on who's who that's watching it. The movie tries to parody as many 70s (and some 90s) culture references, but it's a half and half gamble in terms of being funny. Gore effects is still done ala CG, which is disappointing, but at least they try to make it count.

My biggest gripe for this entry, however, was the ending; Remember the first Wishmaster movie? Remember how it ends? If you don't, let me just spoil it for you by saying the hero(ine) in that movie found a way to reverse the events of the film. Same thing here, only with time travel and people like Adolf Hitler and Jeffrey Dahmer making an appearance. (Don't ask) Normally, I don't have a problem with that, but it's so cheap and easy, I can't feel nothing but a bit cheated.

Hopefully this'll be the last we'd seen of the Gingerdead Man. Unless they decided to do this in space, then we're in deep shit...