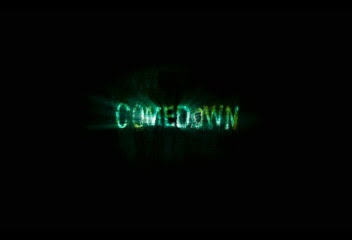 Remember how I hated Wilderness for it's lack of sympathetic characters? Remember how I dislike The Dorm That Dripped Blood's uber-slow first half? Now, combining those two wrongs, would you really expect a good movie?

Six hoodie friends get together one night to break in a seemingly abandoned building to place a pirate radio signal for another friend. And as any teenagers would do in an abandoned building, they decided to stay around, get high and argue so much that it makes me wonder if I'm really watching "friends" being stalked here by a killer later.
So yeah, about 45 minutes into the movie, with nothing to watch but hoodie talk which apparently is one cuss word to another, one of the girls got kidnapped and someone began to hunt down these cursing kids one by one in an array of traps and powertools. Some kills are good, some are just plain, but all in all these wanks are bound to die at a hands of a hooded killer whose motive is still a blur to me... 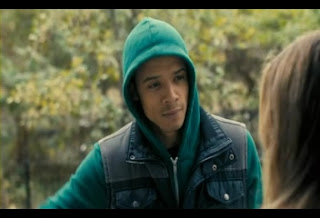 Nothing out of the ordinary for a slasher if you ask me; Comedown is really just another bodycount movie featuring bad-mouthed thugs who had nothing to do in life but just hang around in the streets doing graffiti and look tough (not like it's anything new considering we have a handful of urban slashers out there, many of them I've yet to see).

The choice of making the victims here hardly sympathetic for us to care for is really a thing I wish some slashers would stop doing, as dragging the movie around "building" these kind of cast for almost an hour misses the point of being scared for them. Unless they were setting us up for some really good kills that these type of victims deserve to get; that would have been okay but, sadly, I think I may have set my expectations to high.

Apart from the satisfying nail gun kill, the rest of the murders are hardly memorable; One gal is chucked down in a chute, one guy gets eviscerated with a kitchen knife, another gets torched, all these are bloody good and all with their nifty practical effects, but it's nothing new or creative so that's another point down for me. ﻿﻿﻿
﻿﻿﻿
Eventually, since we have very little casts of cut down here, the spree putters down to an uninteresting climax where we finally see our killer without the hood. Nothing big of a surprise from that department either as we barely know this guy, other than the speculation he might be a veteran nut who had been hiding in this rundown trash hole long enough to actually rig the place. Normally the ambiguity of the killer is what makes a slasher film scary, but after all the battery we have sat through, I'm too frustrated to care or notice.

Even more to add to my discontent was this movie's awful ending. But come to think of it, why should it matter? I don't give a damn about what happens to them (obvious) final leads, so yeah, nothing to special there either.

Those who can understand these kids, or at least had lived through their kind of lifestyle, can surely root for these characters enough to feel for them when they get butchered. For all honesty, Comedown is still a good time-waster of a movie, probably just not for me; it's a bit dodgy in most department (check out that awful CG background! It's horrendous, I tell ya!) but if introduced to the right crowd, or those tolerant enough, the movie is a bloody good time.

Bodycount:
1 male stabbed through the neck with knife
1 male disemboweled with kitchen knife
1 male shot to death with nailgun
1 female chucked down a chute, falls to her death
1 male set on fire
1 male thrown off a building, lands and impaled through a pole
total: 6