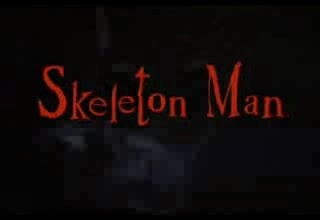 Check it: from the video company Nu-Images, who brought us cleverly titled films such as "Spiders", "Crocodile" and "Mosquito", comes the Marty Sue of all slasher villains: SKELETON MAN!
﻿

We start the movie with a pair of archaeologists cleaning up some jars they dug up, only to be attacked by the titular killer five minutes into the running time. One guy gets axed on the chest and the other runs for her life, somewhat leading the Skeleton Man to a bunch of construction workers where he proceeds to kill all off no sooner. One lifted-and-then-he's-dead guy later, he finally slays off the last archaeologist.

We then shift to daylight some days later, where we suddenly have some guys from the army getting killed off for still no specific reason by the Skeleton Man. And then another set of weeks later, we have yet another group of eight soldiers forming a search and rescue team, looking for previously mentioned army guys, falling prey to the same skellington dude one by one, but not before meeting up a random Native American who tells them the story of a native warrior named Cotton Mouth Joe. As he puts it, Joe slaughtered some tribe years ago and may have been cursed to be our Skeleton Man (or some shit), though I seriously doubt that guy has anything to do with Mr. Bone head out there since the killer looks more like a medieval agent of death (horse back riding, fancy sword and all) rather than a Cherokee warrior in a loin cloth.

So, fifteen to twenty minutes into the film, our kill count had gone around double digits, mostly consisting of random army guys, flashbacks and other assorted bystanders; by the time our troop encounters the ever elusive Skeleton Man, they find out that his bony hide is impenetrable to bullets, teleports through wobbly-looking portals, can pull out a wide array of weapons out of his cloak, has superhuman strength and accuracy, as he seems to have no problem shooting an arrow and hitting a helicopter to send it crashing down to its doom, but still, that ain't stopping these guys from shooting the killer, over and over and over and over and over and -fuck it, you get the point.
﻿

Around the end, we, again, have another massacre and another prolonged stop-and-shoot fight between a surviving soldier (Michael Rooker) and the supernatural killer; they try to make it as if a chemical explosion was enough to kill the skull headed killer, but we know damn well that skinny dude can outlive that.

And he did. Thus leaving the film open for a possible follow-up. Yay for my part? Sadly, I would say Nay!
﻿
For something so enthusiastic on killing a lot of people, Skeleton Man actually threw out too much of the logic and plot for the sake of entertainment, to the point that it's just too dumb and shallow to be even enjoyed by a seasoned slasher fan. Or any horror fan for that matter! The film is uber cheap, from casting, effects (save for that hammer kill involving a girl's head exploding in impact) and camera work, but I would really like to emphasize more on the story for this matter as nothing in this film makes sense; why is there a horse-riding skeleton roaming around the forest in the first place? And is that "Cotton Mouth Joe" Bullshit really related to this guy? Why is there a power plant in the middle of the forest? Why are they calling it a jungle if it's really a forest? Why did that one guy starts to bleed furiously after the killer just hoisted him in the air? I mean, seriously, on that latter, what's the heck?

I would whole-heartily advice you to stay away from this one unless you're very drunk, very high, mentally challenged, suicidal (As watching this movie will surely make you lose hope for mankind) or just the kind of guy (or gal) who loves cheap, brainless horror movies that you can catch in cable TV. (Or ten bucks from Best Buy!) I'm sure you'll be proud of yourself...