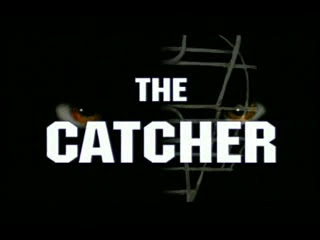 This is one proof that the 90s was desperate when it comes to slasher movies until its late revival. (Courtesy of Wes Craven's Scream (1996))

Imagine watching Friday the 13th or Halloween done under a sports theme, which in this case is baseball, America's favorite past time! We got the opening trauma, where world's worst dad begins beating up his own son coz the kid couldn't pitch, only to be killed when the kid finally mans up and got even! Next thing you know we're flash-forwarding to upteen years later and some guy in a catcher's mask is killing off team members, coaches and managers from that baseball season's losing team ala baseball-themed murders. We know it's the kid, but whether he's one of the team mates or not is this movie's little mystery treat for us. Not like it's been done a hundred times already, right?

Fuck yeah, it was.

The Catcher is a shot-on-video trash that deserves very little or no praises at all despite its intentions being on the right places. While the idea of a baseball themed slasher might be a winning catch in paper, execute that with the worst set of casts I've seen since Troma's Dark Side of Midnight (1984), trippy editing that looks like its been done with Adobe Powerpoint, and a lazy direction where 77 minutes of cheap horrors seems like an eternity only to end with something so anti-climactic, and you might as well hurl yourself off your window for a better night of "excitement".

Giving a few considerations though, I do appreciate the film a little more as an unintentional comedy, as the killer's lame disguise makes you wonder how hard is it to make up some guy's face behind a mask that exposes too much, or that some of the kills here were imaginative enough to do a full attack on logic or shock value. (The butt-fuck metaphor could count as this movie's highlight. I never saw that coming...)

I can't really add much insight to this movie since it's literally like any other slashers out there only in a baseball uniform. I might understand that the people behind this movie must have been trying to bring something new and fresh to the slasher family apart from the familiar deformed mongoloids or silent killers in Halloween masks, but it ain't worth it if we're gonna suffer from crap like this. Funny thing is that this isn't the last Baseball themed slasher out there, not with titles like Devon's Ghost: The Legend of Bloody Boy (2005), the Australian Cricket variant I Know How Many Runs You Scored Last Summer (2008), or the really superior Billy Club (2013), I guess a lot of people are seeing hack potentials in a game where players are allowed to wield a common murder weapon.

Wherever you stand, The Catcher is and always will be a wasted opportunity on my book. A lot of good planning, very little productivity. Just like a baseball team in a ten year losing streak...