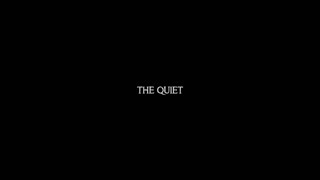 It's been a while since I reviewed a good short film, as in a really good short film. Normally, what I look for in a short is a good plot that can stand on its own and be as effective as any real horror film, despite its short running time. I have seen attempts to do this, more over I've just seen 26 of them last months through my review of The ABCs of Death, somehow that experience taught me the dos and don'ts of making a real scary short, and one of them is that pacing and style can sometimes come a long way.

The independent short The Quiet is a good example of this; bullied into walking the long way back home, Alice is a young deaf girl who finds herself the target of a man who begins to stalk and chase her around the woods with a malicious intent. Having already lost her hearing aid, the girl has no other choice but to run and try to survive her ordeal.

I would like to say, first, that I love the production for this movie. It's a perfect short film in regards to creepiness and tension, and the photography of this film definitely has style. I like how the film revolves around a barren road side next to the woods, as it shows a bit of parallelism of being out in the open where people can come by and see you, all the while one step into a place where no one can't. (That, and the shots of the countryside are just beautiful in this movie) The film starts off there, but as the girl begins to notice her stalker, it dwells deeper and deeper into a more isolated and hidden premise wherein tension doubles into a survival act that is not unlike that of a slasher movie, minus the actual slashing of course.

The simple story, though not entirely original, does call for some highlights by featuring a root-worthy lead, whose deficiency in hearing seems to get no pity from her peers. Add the fact that her nubile age is a bit taboo even for a horror film, the touchy subject certainly strikes a nerve or two. If one would notice how the stalker chases and caress the girl's hair during his "attacks", you can definitely tell this guy's a total creep.

The only thing that I really wish they didn't do here is that they did a little reveal of who was the stalker all along; It could have been anyone for all we know, but I was really hoping they haven't done that twist reveal as it kills off some of the notoriety of the villain. Either that or I really prefer my bad guys to be random loons, since, the way I see it, faceless and nameless villains are a lot scarier since they can strike anytime and can be anyone.
Overall, I simply adore this little creeper. There's some artistic interpretation to the more horrifying incidents that happened here, which is really enough to make up for the zero kill count here, but all in all, The Quiet is an effectively scary horror short to see.