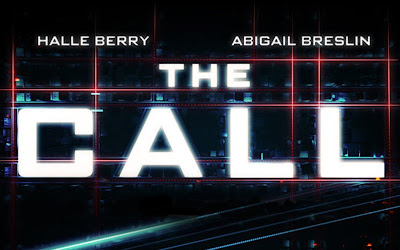 If yer reading this post right now, I'll let you know that the work I'm in the time this post was made was a support help desk representative for LG televisions and blurays. (So the next time you call that 1-800 number and hear a guy on the other line that you can't tell if it's a dude or a gal? That'll probably be me...) Though I am aware this isn't the first thriller out there to feature people behind support desks being harassed by maniacs or sociopaths (I'm sure the 2009 remake of The Taking of Pelham 123 had a guy behind a dispatcher's seat trying to reason with a badly acting John Travolta villain), albeit none of them had gone as exciting as this one. At least around the first half, though.

Hive dispatcher Jordan Turner (Halle Berry) received a distress call from a frightened girl who's currently being harassed by a stalker, one night during her shift. While at first, Jordan managed to get the situation under control and had the stalker fooled into thinking his target's no longer around the house, a simple callback from her end to make sure everything's alright proved to be a fatal mistake when it exposes the young girl out of her hiding and had her kidnapped by the madman. Her body was found days later and Jordan, out of guilt, decided to quit her job but was reassigned sometime after as a trainer to new hires instead.

Six months after the incident, Jordan seems to be getting her life back together, teaching young disptachers the dos and don'ts of a 911 dispatcher, but when the hive receives a distress call from an abducted girl in an on-going kidnapping, Jordan had no choice but to step in and try to save the girl from ending up the same fate that haunted her life since. But what Jordan doesn't know, the kidnapper himself had his own twisted plans for the girl, and he'll stop at nothing to do just that.

The first half of The Call is where most of the interesting stuff comes in; as a nail-biting thriller, The Call played it's cards right with an idea that's fresh and a well-paced execution to keep everything on track. The cat-and-mouse chase between the kidnapper and the law-enforcers as both parties tries to locate and evade one another from one source to another was the movie's main hook to keep the audiences watching in anticipation to whether Jordan will succeed or fail in an attempt to redeem her past mistake. But at some point in the middle, the film began to degrade into a familiar slasher film territory; with the kidnapper savagely, and openly, murders anybody that tries to stop him or get in his way, worst of it comes at the near end where we ended up playing a classic chase scene around the killer's own special domain, dedicated to his twisted MO, and ending the movie with a rather unsatisfying openness.

Through and through, The Call definitely has style; some tricky camera work and editing brought some of the tension and distress both the abductor and the abducted are experiencing during their little joyride, and too the cast's stellar performances that makes them a likable bunch. Kudos to Halle Berry for bringing to life a lead that's both powerful, distressed and sympathetic, as her character tries her best to save a girl through nothing more than a few instructions and a gamble. We also got Abigail Breslin as Casey, the villain's current victim who despite her initial panic, slowly began to mold a fighter out of her distress. The two leads actually made something to root for the most of the film's running time; both are everyday people forced to handle a situation that can happen in one in a million chances, though I can't really say the same for the villain here, as his motive for the kidnappings borderlines between believable and to somewhat cliched and silly. (You can tell by his murder spree that he was never prepared for any fuck-ups, hence tons of silly reactions when people began getting too close in discovering his work.)

Despite the lame ending that's been done a few times already (those who'd seen Dead Girls (1990) or at least the first SAW would surely understand), The Call is a refreshing thriller-cum-slasher hybrid that tries to restructure what we usually know about these sub-genres; albeit nothing overly big, it hits just the right spot when in terms of crime entertainment. Worthy a viewing!