Poes Cheapo Murder Extravaganza!: The Masque of the Red Death (1990) 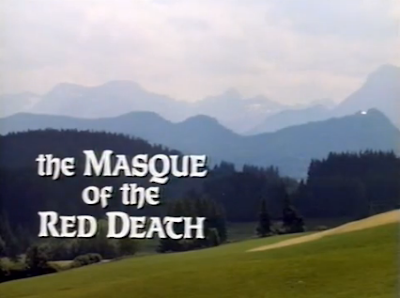 When I was in High School, I adore dark literature; while my classmates are busy oogling at girls, WWE marathons and Harry Bladder- I mean, Potter- Books, I'm in the school library looking for works by H.P. Lovecraft, and Edgar Allan Poe, which sadly doesn't carry any of those, so I'm forced to buy and carry my own copies.

Now, as I grew older, little has changed, though my Stephen King, Dean Koontz and Robert Bloch collection flourished a lot better than my two past heroes. I do still pay my earnest respect to those two, however; One of my ways in doing that was to enjoy a good movie or two based on their works, but, for my record, I've seen more Lovecraft-based or inspired movies than Poe's, probably from the fact that Lovecraft's mythos were more colorful in terms of horror. For Poe's case, it's very tricky, but as far as I can tell from my memories, the only movies I've seen inspired his written works would be that one wonderful Masters of Horror episode The Black Cat and that mediocre crime thriller The Raven. Other than those, I've yet to see another (fine) example of a good Poe-inspired title.

Then comes in this little whodunit murder mystery that I first saw as a TV movie where me and my mum laughed at for it's corniness. I'll be true, I never thought it was gonna be a bad BAD movie, but after a few years I managed to dig up a copy of the late 80s cheapo and, well, my guesses where right the first time around seeing the movie...

Based on Poe's own short story of the same name, we follow here a group of costumed partygoers, who some owes a large sum of money, but nevertheless enjoying a Poe-inspired masquerade inside a Bavarian castle hosted by an eccentric yet wealthy host, Ludwig. Unfortunately, the party had to be cut short when a series of gruesome "accidents" had taken the lives of  some of the guests and someone in a red papermache mask and a hood is making sure no one survives this party. Why? Cuz they have an agenda regarding Ludwig himself and just cuz they can! 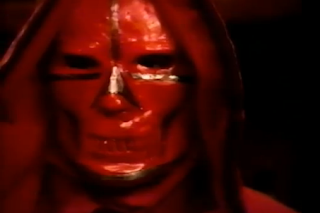 Now, plotwise, Masque of the Red Death is more of a cheddar infested take on an already cheesy whodunit, where people gets split up or wanders off by themselves for one reason to another, only to be killed by a short, red-attired killer in a cheap disguise. And if you think that's cliched, just to think, cast could had just left by the time they figured out there's a killer on the loose, but nah, where's the fun in that? So for some unexplained reason, Ludwig had few of the guests locked in until daylight, making them sitting ducks for the killer to pick off one by one until it was revealed who's behind the spree.

(Spoiler though, the reveal makes little sense...) In what looked like to be a TV-budget production, the film ticks away one minute at a time filling us with lame characters, convulsed plotting and hazy characterization. There's some attempts to elevate it into something mroe bearable, such as modernizing Poe's story with rock and roll music and a bit of sci-fi even, but that ain't enough to save this film's reputation as a trashfest B-Flick. (Almost insulting in a manner that they try to associate this with the master of the macabre.)

Positives, however, would be that the murders are at least creative. We got a variety of killings, each in their own degree of brutality and tension. Two such examples would be a scenes involving a victim being trapped in a weaving apparatus while the killer sew in jumbo-sized needles, and one involving a pendulum-clock device that inches nearer to a victim's throat by the minute. It's pretty cheap on gore, mind you, but at least they're trying.

I can't say I hated The Masque of the Red Death all through out, but I wouldn't say I liked it enough to let others see it out of dumb-farted glee, either. Rather, I would say it's a fair slasher movie that had all the basic ingredients, but none of that extra flavoring that would had made it better. (No, I do not count this being a hack' n slash take on Poe's story as an "Extra Flavoring", for the reason that we hardly felt that fact. Nothing Edgar Allan Poe-ish here) Perhaps if they had focused more on the film's direction rather than style and gimmick then we would had something to clamor about, but battling babe climaxes, weird science, and  Darth Vader-voiced killers with lengthy monologues? Yeah, I don't see a movie with much potential if they those elements hanging around unless you want something to laugh at. If that's your case however, dear reader, then you might wanna open up a beer keg if you wanna indulge yourself with this crap...