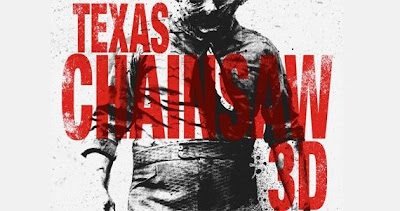 Here we go! The latest of the TCM franchise as of writing this and my God, it's a sequel directly of the 1974 original?! It's hard enough that majority of the public may not have even seen the original, but make one ten years after TCM 2003 was released? I wouldn't be surprise if there's going to be some confusion but if this movie's targeting hardcore fans, then let us all be hardcore fans here for the time being and review this little disaster.

As a form of consideration for non-TCM fans, we open up with the ending of the original in full stock footage, before continuing to our film moments later as we watch the Sawyers get cornered inside their own house, including not only Drayton and Grampa, but also Drayton's wife (?!) and four more hicks with shotguns. (and one of them being "Boss Sawyer"?!) Hearing of the massacre, the townspeople drive to the farm and brought down a hail of bullets at the family in an act of vigilante justice before torching down the place. Drayton's wife is the only survivor, but didn't last that night as she's quickly found by one of the town folks, got killed and had her baby stolen from her.

The baby grew up as Heather Miller, who's about to find out she was an orphaned girl when she receives a letter from her grandmother, Verna Sawyer. Apparently, gramma passed away and left a sum of inheritance, an entire mansion and everything on and in it  just for her. Picking up her friends to join in, Heather will realize that everything actually includes something -or someone- living inside a hidden room. Someone with a big penchant for heavy powertools and a habit of collecting skinned faces. Someone named Jebediah Sawyer, AKA Leatherface who's also her cousin.

Texas Chainsaw, who for some reason dropped the "Massacre" from the title, is perhaps one entry in this franchise that made very little sense to me. Other than the aforementioned problem with its marketing, I don't really see a point doing this movie. I mean, I wanted to see Leatherface again, yes, but I was expecting something more creative than this.

Plot-wise, it is certainly something I never heard of before; the idea of family loyalty was tossed around in each entry of this franchise with varying level of deepness but never was exploited and twisted as this entry did. Alexandra Daddario's character Heather was practically scared to death of Leatherface around the first half and I wouldn't blame her since the guy just so happens to sew masks right through his cheeks, but would you actually change your mind in the last minute just because you found out the townspeople torched down a family of massacring hicks which happens to be related to you? Or because you found out he's your cousin? I mean, I know you're family, but the guy nearly sliced your arm off with a chainsaw two seconds ago!

And to add more to this movie's ailing levels of good and wrong, the sheriff of the town's actually siding with the Sawyers cuz he thinks what happened to them years ago was just wrong. Really sheriff? Again, these folks massacred a bunch of teens. And I recall these bunch were enjoying it! I would like to see you act all calm like that if you found out one of them bones decorated in that house was your junior!

But the biggest problem here is that there's no clear line between who's the real bad guy here. It's as if Leatherface was being marketed here as an anti-hero and as much as I wanna side with Leatherface to kill these guys, I can't since they got a good reason to hate him; he's a murdering barn boy who's practically dangerous when he gets out of hand. But then again, Jeb here was explained to be mentally challenged, so I can't really blame the boy if that's all he can do either.

I can't side with the rest of the cast as well since they have no redeeming qualities. They're big douche bags; Heather's boyfriend happens to be cheating with her so-called gal pal, there's a thieving hitchhiker, and a vigilante town mayor. I'm close to siding with heather but with hasty decisions like that, I'm a little frightened of her... (I mean, crunk! She's suddenly siding with the guy that killed her friends! And she doesn't even know they where cheating behind her so I don't see much of a reason for her to change sides like that!)

And yet, it's Texas Chainsaw Massacre. The one movie franchise I can't get enough with (save that horrid Next Generation entry. ILLUMINATIS ARE NOT SCARY!) so I can't go all the way hating this. The silliness of the movie has it's charms and the gore made it worthwhile. And while many of its attempts to humanize and  hero out Leatherface seems awkward and misplaced, I'm kinda open to that idea. Word is that they're gonna attempt to franchise this with another sequel, something I'm both excited and terrified about.

Not the best entry by a long shot, but it does beat TCM The Next generation to the twisted twist game. Let's applaud it for at least that and for trying!

Bodycount:
5 males and 1 elderly male shot dead, burned
1 female kicked on the face, neck broken
1 male had his face bashed in with meat hammer
1 elderly female found rotting
1 male gets a meat hook to the back, sliced in half with chainsaw
1 male crashes through windshield, throat cut
1 female shot on the head
1 male had his back repeatedly hacked with an axe, face peeled
1 male pitchforked on the gut
1 male dismembered with chainsaw, shredded through meat shredder
1 male and 1 female presumably killed with chainsaw
Total: 17