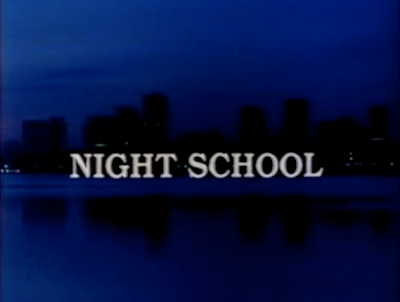 Pass the Brooklyn Bridge and into the depths of the slums of New York, a city where in darkness, a "head hunter" in a full black biker's bodysuit and helmet starts decapitating seemingly random women. On the case is Police Lieutenant Judd Anderson who begins to link some of the murders to an Anthropology professor working at Wendell College for Women, where said mentor had a bit of controversy for having an affair with one of his students, who also happens to be one of the killer's victims. Right now, the professor seems to have persuaded the board to keep his job, educating bright minds with the fascinating world of headhunters from New Guinea.

Not the best lesson to share when you're trying to avoid any suspicions for murder to be honest, but it appears there might be other possible suspects, including a skulky looking feller and a lesbian headmistress. There's also a peculiar connection with all the murdered bodies as they all appear to have their misplaced heads dunked in water, a "purifying" ritual commonly found in headhunter tribes. Could it be that the professor has lost sight between giving lessons on human headhunters and actually partaking it? Or could the killer be among the red herrings obscured by the investigation?

Night School is a tough movie to chew on as one can't really decide if it's an underrated masterpiece or a trashy exploitative romp. Mixing traditional Gialli visual style and storyline with American slasher stalkings and brutality, the movie actually tries to be serious, but there's often little hints of strangeness that made it laughable in small parts.

The opening scene, for example, had a preschool teacher bidding goodbye to her students and waiting around in the dark sitting in a child's merry-go-round. When the killer appears and begins spinning the set, rather than jump off or duck, she stays on the playground ride and just begged the killer to stop spinning. Then comes the machete, off goes her head, the rest comes with the silly set of possible red herrings, including a peeping simpleton and a headmistress interested in same sex affairs, none of which coming close to even being suspicious.

If these little silliness wasn't enough to make this movie questionable, there's also that one bit that made this movie "infamous" for hardcore slasher fans and that is it's lack of gore; we do have blood, a fair dash of blood spewing out of the hapless victims as our killer slices their way through them, but by the time the "execution" is about to happen, the movie cuts right off before the blade even touches their necks and plainly shows the aftermath after a few scenes. Call it lack of budget or artistic license, but for gorehounds everywhere, this is a cheat.

And yet, quip enough, the lack of extreme gore also works. May it be the realism of the kills or the stylish editing and camera work, the bloodlessness somehow gave way to gripping scenes instead as our victims begged, scream and cower helplessly whenever the vicious killer mercilessly attacks them. Perhaps the winning factor of Night School is its gritty, relentless and controversially misogynistic tone of the attacks and the murders, going side by side with a story that actually works most of the time, looking pass the comical bits. Told true, the killer in this movie even gave one interesting modus that's often tackled but never stretched and twisted as this movie did.

Ultimately flawed but a rent-worthy slasher title, Night School's thriller set-piece may fail to do what it's meant to do, but as a cult fave, it's worth a good shot.