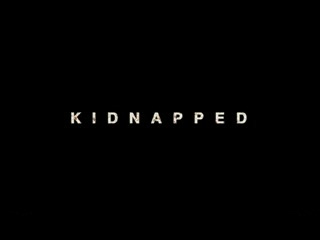 Though the title's a bit misleading (nobody got kidnapped. Nobody), think of this movie as a study of all things you shouldn't do in a home invasion.

Opening with a bagged man stumbling his way to save what appears to be his family, he blindly made it to the road and got hit by an oncoming car. Surviving this, he begged the driver to pull out his phone and call a number and, as it turns out, whoever had done this to him had already made their way inside his house.

Cut to another man, driving to his mansion located at the up-top of a gated Madrid community; he's moving there with his wife and his teenage daughter, who both are going through your usual mother-daughter bickering. So far, things hadn't elevated to something extreme until night falls and they came...

Armed with guns and a sledgehammer, three thugs in balaclavas breaks into their house and holds them hostage. One of them ordered the father to drive a thug out to town and transact every penny the patriarch has in his bank, while the rest stays to keep an eye on their prey. What comes next is a night of survival, where one wrong move can cost anybody's life...

I would just like to point this one out as early as now since this is the only flaw I saw from the film; while the man of the house wise-up and do what the thugs are ordering him, the two female leads have pretty much done nothing but run and scream, which is a big no-no when it comes to surviving home invasions  in real life. I mean, why agitate the thugs? They're already freaking out from what they're doing, why do something else to upset them more? I know they're scared and possibly lined up for murder but could they at least try and think up a calm plan to live through the night? The director wanted a realistic fright flick, and honestly, seeing two women blindly running through the house is kinda stepping on a borderline between realistic and pure fiction horror.

Then again, I guess you could always say, not everybody can think as calmly as possible when at the mercy of someguy with a gun, and there's gonna be those people who will act out of instinct. Which explains the gallons of blood...

Moving this little movie cliche aside, Kidnapped is a depressing study on fear and tension, wherein everybody's chances of survival is a gamble and only time can tell when and how things will sort out. Putting together, for me, the most adrenaline-rushed home invasion I've seen, the film's fast pacing gave little dilly-dallying and went ahead on delivering the most harrowing things to happen in a household, including rape and oh so many murders. It's really tough to watch, but the movie flows with some frighteningly beautiful cinematography (I mean, split-screen! I love split screens!), and top-notch gore effects (Especially the vase-to-the-face bashing), the net result is a movie that's aiming to cringe and upset, and by the time it comes, it works and doesn't let up.

And as the entire movie forces its audience to endure the hysterics the film dwells in, it all boils down to a tense final act and a closing that shouts nihilism and bodycount. Whether you like it or not, it may leave you something to ponder about once the ending credits starts, a feel of emptiness or catharsis perhaps. One thing is certain and that it will divide viewers to either appalled haters or intrigued fans.

You can say Kidnapped had done what it's supposed to do as a home invasion thriller; despite a couple of flaws, it still taps that anxiety of bad folks breaking into your house, only this one went on an extra mile with some slasher flick influence. (masked men chasing folks in their own house?) If you love to scare yourself with thinly-plotted home invader horror flicks, you can't pass this one!