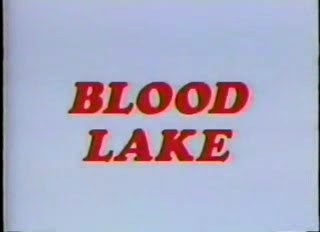 No, no, no. Absolutely not worthy of our time. Ever. Lend me your eyes, my dear reader, and take a time to read this fair warning as I will tell you the horrible tale of a cheap-shag that tried to be a slasher flick with a dull blade and worthless so-called thrills. A shag I would like to call: Blood Lake.

Eight teens (well, six teens and two 12-year olds to be more precise) crash to a lake house for some R&R, water skiing, booze drinking, offscreen sex and the occasional friendly chit-chat. Which ate up about a good hour or so for a film that runs 82 minutes until the horror part kicks in, featuring nothing but a fat bearded man with an ugly hat and brandishing a steak knife, killing half of the casts before being stabbed into unconsciousness. And surviving. The End.

If that sounds like fun to you, then mate, I'm sorry but you're desperate. Blood Lake looked less than a DIY horror flick and more like a family vacation tape with a bonus snuff flick! The only interesting things I got out of this film were me trying to figure out for 15 minutes if Lil' Tony was a dude or a girl (Audio was terribly muffled so I had a hard time trying to decipher his lines. I figured out he was a dude when I began to notice he won't take off his shirt and he's called as somebody's brother...), and the terrible ending shot where our fat killer watched in amazement as his lake dried up, closing with a caption saying that said lake "special effects" was an act by God.

And somewhere in heaven, Lord is flushing embarrassed.

While bad acting, cheap effects and improvised script is a common sin for these kind of movies, Blood Lake took a step down from the barrel as it fail to identify itself as a slasher movie. Not only was there no plot and the premise is overused by it time, but the killer's totally random (with the lamest motive ever), the kill scenes were badly lit, and the bodycount's really low; without any improvement from these, a slasher flick can't call itself one, so might as well re-edit the horror scenes away, glue on a happier ending where everybody lives and re-title this one as "How I almost wasted my Ma's family video by making it into a slasher movie" (with the entire Blood Lake movie as a bonus feature!)

I understand this is all for good fun, but God, if I wanted to watch a home video I would rather watch a thrilling documentary like, oh I dunno, Catfish (2010)? Nope, I came here to watch a slasher flick, and when I watch a slasher flick, I want bodies dropping in pieces, not peeps water-skiing.
Unless yer collecting every single slashers out there, I suggest you pass this one off. It may look or sound interesting, but in the end, it's a film begging to be rarely or accidentally rented...