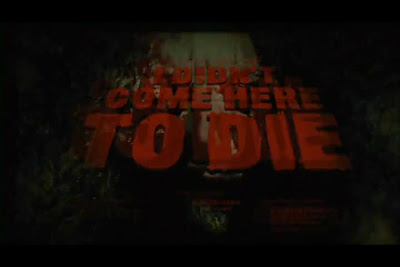 Looking at the packaging made for this movie, I wouldn't blame myself for thinking it's another run-in-the-mill backwoods slasher flick. Whether it's a ploy to lure us gorehounds or not, I would really suggest you guys to give this title the benefit of a doubt and try it. Cuz it's a lot cleverly written than your average slasher movie.

After opening with a cop inspecting a dead guy in the middle of the road and getting attacked by an eyeless gal, we suddenly shift our attention to six teenage volunteers driving to the woods to prepare a campsite, expecting a long day cutting branches and digging pot holes. So as day turns to night, half of the teens went ahead and sneaked out that evening for a well-deserved whiskey break and sex, with a by-the-book misfit she joining in to get hammered. It turns out however that she can't handle her liquor that well and threw a fit at the rest for not taking their volunteer work seriously (or something like that) before stumbling and poking her eye out on a branch.

This leads to the head volunteer taking this unlucky gal to a nearby hospital, leaving the mysterious quiet guy she had sex with in charge. As morning comes, our remaining volunteers go about their day as scheduled, but as more accidents pile up and brash decisions begin to cost the life of others, volunteer work does, indeed, gone killer...

Think  Final Destination mixed with the sensibilities of the underrated Israeli "slasher" Rabies, thrown in some good gore, awesome tension build and some very interesting characters, I Didn't Come Here To Die is a good look back at low-budget indie shockers.

Taking notes from classics such as The Evil Dead or Friday the 13th, the film started steady enough for us to catch up a little about our cast, showing a little deepening for each six teens who all have something behind their flat demeanor. They rocky and uneasy relationship with one another gradually intensifies by the time the accidents begin to happen and taking them down one by one in an increasing pace, devolving scene by scene into a real gritty climax where friends turned to foes, guilt induces suicides, and overlooked dangers bites them real hard.

You can actually tell something bad's gonna happen at a particular scenario, but the direction certainly knows how to built to it enough to make the impact memorable. Accomplishing all this with a small budget, which might also be restricting it to do further more.

Telling you all this, I Didn't may not be a real slasher film per se, but it has the charms of one, making it a fun and acceptable watch for genre fans like you and me. A little predictable at some parts, yes, but it still packs its own twists and chills to keep you watching from beginning to end. If there's any flaws in this title, I might say that it might not impress everybody, due to taste and stuff (the usual), but I am standing by my words; It's well shot, engaging story, good in pacing and bloody for our delight, I'm certain we can all enjoy this one!...or I assume you will. Wherever your boat floats!

Bodycount:
1 female had her head sliced in half with chainsaw
1 male hanged
1 female brained with shovel, head bashed in with rock
1 male decapitated with shovel
1 male ran over by a car
total: 5
Posted by Kaijinu at 4:20 PM