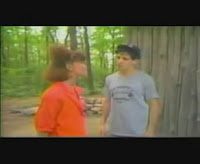 Paired up back to back with an equally silly home-made slasher flick known as "Attack of the Killer Refrigerator", The Hook of Woodland Heights is an easy-running 40 minutes of backwoods killer cliches that seems to be inspired by a particular urban legend involving a sex-crazed couple and a sinister hook...

Tommy and Katie, a suburban couple, heads off in their car and parks near a cabin deep in the woods, for the occasional premarital sex. (Even if Katie wanted to go to a movie instead) Meanwhile, at a nearby mental asylum, one-handed loonie Mason escapes after crushing an orderly to death behind a door and slicing the other's head with a thrown clipboard.
The killer soon found his way into stealing a barbecue fork from a vacationing family, kills their dog with it, and found a way on how to make sure he wouldn't loose his new weapon by removing the handle and painfully sticking the metal blade into his right hand stump, just as Chucky did in Child's Play 2. Whether he realizes that it's gonna be a painful process removing the blade once he decided to replace it with a machete's blade instead or not, Mason eventually murders his way to Tommy and Katie's cabin, who failed to hear the radio coverage of the psycho's escape, distracted by sex. Will they get out of the woods alive? 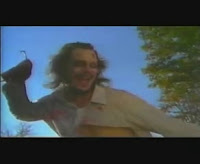 The Hook of Woodland Heights is a terrible movie, but in a sense that it is watchable as a gory B-flick! Running on a short 40 minute, there's a bit of character in this title, quick on the pacing, a fair count on kills, and gory without being mean-spirited nor relying on any big budget effects, may that be a good or bad thing for you.Yes, there's bad acting, schlocky audio and camera work, but compared to most do-it-yourself shlockiness, I am impressed with this one and I am glad to say that it's definitely a keeper! If you can find this title, whether as a cheap VHS rental back to back with Attack of the Killer Refrigerator or online through a generous host, find a time to relax and enjoy a fun time-waster that is The Hook of Woodland Heights.