Survival of the Fishbillies: The Watermen (2011) 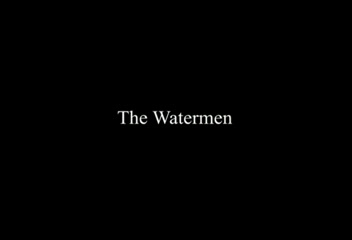 After giving that"Fishbilly" movie Harpoon: Reykjavik Whale Watching Massacre a good review, I was thinking this might be another exciting gore-fest featuring rampaging madmen in a fishing boat. So, I gave it a swing...

And brained myself by the time the film ended.

The Watermen is something like The Zero Boys in a boat; with the victims trying to survive a trio of unhygienic, murdering, raping "fishbillies", who are picking off stranded teens to grind up into fish bait. Cuz, buying fish bait for chum is expensive, and picking up and grinding road kill is harder than chasing and killing teens with a possible chance of one of them fighting back to kill you first. 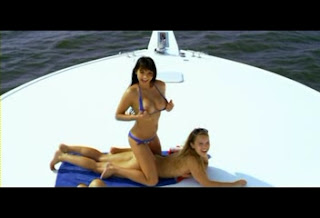 Ironically, that's just what happened here; a group of six partying teens decided to soak up some sunshine in one of their buddies' boats, while enjoying the pleasures of fishing like real men. Only, after a while, they found out that, while they stopped in a bait shop for supplies, someone from there took most of their fuel and resources, practically trapping them in the middle of the vast, vast waterworld. Help came days later in the form of a worn out yet fully functioning fishing boat, with the three killer fishermen drugging our teens into unconsciousness, raping some of the women, and then killing at least one of them before they all escaped and began fighting back. The kids killed one of them, the remaining killer fishermen two killed two more of the teens, they fight in turns with both parties surviving even the most fatal blows I've seen, ultimately leading to a twist ending that's done before, but hardly worked for this one...

I'll give the killer's dumb MO a little credit for being the most exaggerated reason to kill, so much that it's actually funny. However, I can't ignore this film's lack of anything exciting; I have no beef with high survival count so long as their attempt to live through the night makes it worthwhile, hence why I gave The Zero Boys also a fair rating, but these teens are hardly interesting, their attempts to fight back only got my attention by the last five minutes as they spent most of their time flailing and punching our badguys into unconsciousness, and the villains failed to make any impact at all! There's also some really odd continuity problems here; like whatever happened to that guy sailing the boat with the kids? He was there for one scene, and then right after the kids got stuck in the ocean, he disappears. Then there's the villains' (and even one teen's) uncanny ability to survive anything (including an entire boat exploding) which is kinda pushing the slasher film rule way above the usual level.

I actually bought this movie the time it came into the shelves, and watched it soon enough. I recall hating it at first viewing, but I forgotten about it for some time so I have to re-watch this dreck hoping the next time around my opinions would have changed. Guess not.

So yeah, unless you fancy yourself an economically challenged killer who can survive being burned alive, even if it's clear they're human, then go for it. If not, good for you! You can do bloody better...

Bodycount:
1 female impaled by the shoulder with fishing gaft
1 male disappears, presumably dead
1 male dismembered with machete
1 male gets a shovel to the mouth
1 female had her chest cut open with knife, silicon removed
1 female gets a hook to the jaw
total: 6