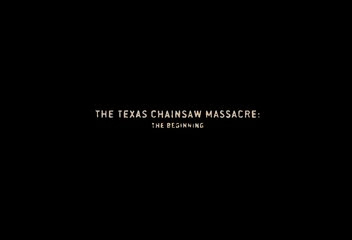 Seriously? Y'all hating this masterpiece, seriously? I don't know whether it's the bad advertising or the fact a lot of people was just tired of going through the same splat attack introduced by films like SAW and Hostel which took over the early 2000s, but one thing is certain about this movie and that is it deserves a second loving.

At a meat shop in 1939 Texas, an obese pregnant woman dies at work while giving birth to a sick yet breathing baby boy. The manager, heartless and disgusted, carelessly throws the baby away in a nearby dumpster where so happens a young Mae Hewitt was scavenging for meat. She finds him and took him home, thus begins baby Thomas' life as a Hewitt.

Thirty years later, Thomas, now a grown man ridden with a rare skin disease that ate most of his face away (forcing him to wear a mask made from animal skins), works in the same meat shop his real mother died in, which is now closing after health inspectors deemed it unsuitable to operate due to it's horrible condition. After being insulted by his boss one last time, Thomas murders the man with a sledgehammer before stealing a chainsaw, the attack heard over by the local police station during a failed 911 attempt. Sheriff Hoyt, the last law enforcer in town, responds and escorts Thomas' uncle Charlie along in hopes he can help him talk his nephew down into complying, only for Charlie to murder the sheriff instead out of his claim that "there's nothing wrong with his boy". Uncle Charlie then takes on the late sheriff's identity and butchers him for food.

All the while, two brothers enlisted to Vietnam were traveling cross country with their girlfriends when they got into a hustle between a biker gang, one of whom proceeding to stalk and chase them in a robbery effort. Unfortunately for this biker chick, "Hoyt" was just around and quickly murders her, abducting the teens for himself; one of these kids, Chrissie, got thrown out and lands further away during a crash, obscuring her from the rest and forcing her to watch everything unfold in front of her. By the time Hoyt takes away her friends, Chrissie has no choice but to muster up and follow them to the Hewitts, now gone mad from hunger and poverty. But can she save them all from being lunch meat if who she's up against is a hulking brute armed with a chainsaw?

Let me first point out the movie's limitations; while it has some great plot angles, TCM The Beginning is still a slasher film that does everything by the book with nothing more to stand out with other than the point it's an origin story and it is gory. While I already accepted the fact that majority of our modern slashers lack any real scares (with varying level of tolerance) and their main focus is often in piling up bodies in every creative way possible, what was missing in that department I often look elsewhere and in this film, I find it in the flow of the story and the actual tone of it.

TCM The Beginning works a little better as a period piece than TCM 2003; with the inclusion of the Vietnam war subtext and the movie's very barren premises, it helps settle the hopeless feel this movie has and the reason to why the Hoyt family has no problem eating other people. (Something the 2003 remake failed to live up or even hinted) There are also some very great acting here, especially the two roles by Matthew Bome and Taylor Handley as brothers who have bickering ideas about the war, filling yet again some insights into the movie's mood. R. Lee Ermey returns to reprise his role as the homicidal sexual deviant Sheriff Hoyt, who's still a nasty addition to the Texas Chainsaw mythology; though here, we actually see more of his bad side as a demanding pervert with a penchant for torture and murder, again acting as a realistic contrast to the hollywood-ized monster that is Leatherface.
The rest of the movie's horror elements and plot heavily rely in shock value brought in by the gore and meatier saw action that I felt really lacking from the 2003 reboot, with a still-menacing looking killer -  who honestly should have stuck around with the animal skin mask than the supposedly iconic face mask (don't hate me) - to go along with these kills to make it all better for me.

This is a brutal and beautiful movie, honestly, and I wouldn't blame you if you think I'm crazy. Maybe it's the unrestricted gore speaking to me, but I see TCM The Beginning as that one kind of movie that grows into you after repeated viewing and, compared to the rest of the franchise, might be the only one that actually lives up to the Chainsaw Massacre. I believe this is a winning draw and anybody else who wants to stone me for that can kiss my proud love-cheeks!