lazy to come up with title coz this movie sucks so insert one here yourself: Splatter University (1984) 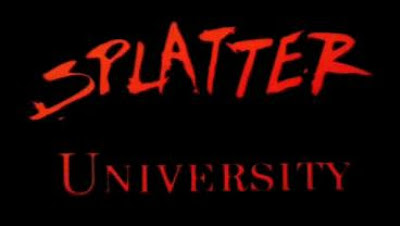 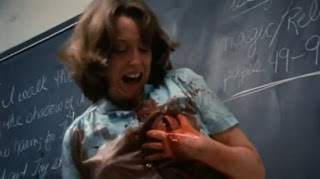 I saw Splatter University under the impression that it's so bad it's good and that some peeps out there actually gave this movie a little credit. But after ten minutes into the movie, and me checking out the box and finding out Troma released it (Oh shit!), it all made perfect sense to me why some (if not most) slasher fans out there hated it.

A Mental patient de-groins and cuts the throat of an orderly before escaping to freedom. Cut three years later where a School Campus' teacher got murdered one night by the same crazed loonie, thus cueing a replacement teacher who tries her best to teach a class of obnoxious, dumb and/or sleazy students whose reaction to someone dying is often followed by a witty (?) sarcastic remark. But as more bodies pile up on top of the other, more inept dialogue follows and a race to find the identity of the killer begins! 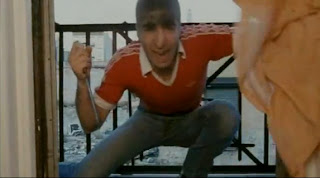 For me, it was too late; right before the whole movie started, I've been bombarded by the most annoying cast I've seen, along with the dumbest script and acting I ever laid my eyes on. So is it really a big surprise I can't stand this? I know slasher films aren't the brightest sub-genre to begin with but I think there's a difference between being cheesy and over doing it. Being cheesy makes you laugh at the un/intentional corniness of the movie, but am I the only one who's a little unnerved that the male casts here doesn't give a bat's eye that their girlfriends are dying off one by one? (one of them being pregnant no less?) Now that's just sick, mates, and I don't like sick sexual bias with no reason behind it. Night School (1981), for one, had plenty of female victims coz *spoile ralert* the killer's a jealous lover. Here? Heck, even the reveal was just senseless unlikable bad taste.

Gore is good, though, so I'll give it a star for that, but the rest, I'm better off jumping into a woodchipper than watch this garbage all over again or, on a lighter suggestion, re-watch Woodchipper Massacre,which has the similar feeling of going through a woodchipper, only funnier!