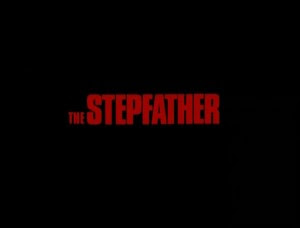 TV series' Lost's Terry O'Quinn stars as this film's titular serial killer who systematically murders every household he becomes a part of whenever he deems them unfit for his perfect vision of an American family.

Early in the movie, we catch a glimpse of a fresh massacre as our psycho dad grooms himself, leaving to start anew his life with another potential family. A year later, our killer named himself Jerry Blake and married a former widow, though his relationship with her daughter, Stephanie, is somewhat bitter despite his strains to get along with her, a suspicious desperation fueling Stephanie's uneasiness with him. In fact, with Blake's strict sense of White Fence idealism, Stephanie's more or less restricted from doing anything he sees disappointing such as dating boys. 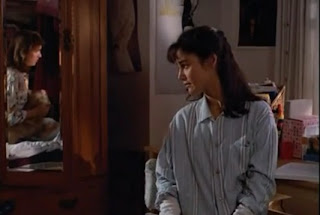 Meanwhile, Jim Ogilvie, an amateur detective who is also the brother of one of Blake's previously murdered wives, tries to track down his sister's killer and ends up roaming in the same neighborhood Blake is at. As Jim managed to publish the story of his family's murder in the papers, it unnerved Blake to the point his good father persona begins slipping away again.

Taking notice of this, Stephanie becomes more mistrustful of her new father and speculates that he might be the infamous family killer. But with Blake one step ahead of everyone and killing any people who might be a threat to his ideals, can Stephanie save herself and her mother from a killer already living in their home?

What worked well in The Stepfather is the realism of the situation; technically, any guy out there can just pretend to be the man of every woman's dream before backlashing his true self at them. The uncertainty and dread of this possibility is well played here, giving a potentially terrifying villain all the depth and intrigue needed to be a true monster. I guess that's what you get when you base the movie's plot on the crimes committed by notorious the serial killer John List, who murdered families and covered his tracks by changing his identity, the same manner as our movie killer's own modus.

However, what didn't work for me is that while O'Quinn's character has his moment of creepiness and intimidation, his hammy lines whenever he's in "father mode" kinda thins (if not kills) his good parent disguise. This might just be me but who can say "You know something? Until this moment I never really knew what Thanksgiving was all about." without expecting anyone laughing or rolling their eyes at them? You can definitely tell this guy's up to no good with cheesy lines like that. (That or he's a nerd. A potentially dangerous nerd) Ironically, this cheesy persona might as well be the trigger point for the character to turn psycho, as his inability to accept the reality of imperfection somewhat forces him to take matters in his own hands. Deadly, murderous hands. 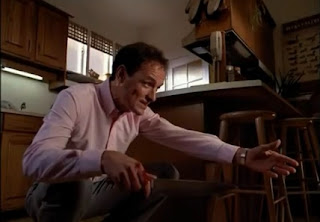 That being said, The Stepfather is a unique kind of a slasher film, wherein the build-up focuses more on the killer's attempt to live in a normal life while still exhibiting hack-and-slash movie antics around the last half our of the movie. The bodycount is surprisingly low in terms of onscreen murders, but so long as the killer's ploy is thrilling and engaging enough to keep me watching, and too  it is graced with the presence of Jill Schoelen, one of my fave Scream Queens around, I'm okay with it.

Soap Opera-tendencies mixed with slasher film build, The Stepfather is a worthy cult classic that deserves its following. While not the best slasher I've seen, it is good enough for recognition. 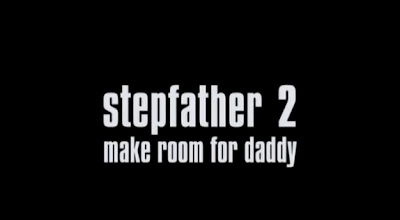 I never really saw the necessity to franchise The Stepfather. Personally, that's just pushing it; last time we saw our Family Killer, he gets a knife buried deep into his chest. So following that with something like him surviving said attack only to continue his deranged mission just threw away the realism of the first movie and puts this sequel into cheesy slasher territory.

Terry O'Quinn returns to play the killer stepdad once again, now institutionalized and building progress in rehabilitating himself. Or so claims the ward's psychiatrist. After a one-on-one session with his psychiatrist, stepdad proves him wrong (and dead) when he sticks a disguised pick into the doctor's neck and murders a nearby guard, escaping once again to wreck havoc and live his prefect dream life.

Now living under the identity of Dr. Gene F. Clifford, a family psychologist (oh the irony), he drove to Palm Meadows, LA and managed to own a house, which so happens to be right across a Real Estate agent and her son. Eventually, he tries to court her and almost live a normal life until people start popping up between them, such as an ex-husband and a family friend who just so happens to spot something odd about "Dr. Clifford". So what does he do? He kills them, of course! After all, who wouldn't kill for a perfect family? But can he hold this bloodlust long enough to have himself (re)married? 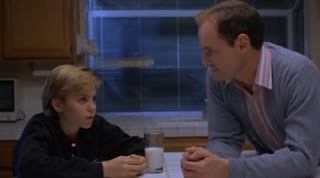 Following the usual slasher franchising cliches, Stepfather 2 brought more onscreen murders and a little more splatter than the previous entry. Other than that, the film is pretty much a rerun of the first movie, minus any suspicious family members, giving more light to the Stepfather character and how he tries to keep his identity and his vision of a perfect family completely intact. So it's basically him running around and trying to be a good dad for most of the time, making Quinn's character more sympathetic in this entry. This is okay for my book, but despite the more character-driven take on the familiar story, it's still ridden with some cheesy plot points like that fact some of the characters here seem to have never heard "camp town races" before ("Where did you heard that song?" a concerned mother asks. I was waiting for someone to say "What planet you came from, lady?" But alas, it never came to be), so I have put down some of my ratings for that little dumbassery.

With little on the plotting department, the movie passes as a franchise entry with a fair cast (Meg Foster from Masters of the Universe (1987) stars as the lady apple in stepdad's eye and Caroline "Stretch" William from Texas Chainsaw Massacre 2 as a family friend who got too close into finding Stepdad's true identity) and some good atmosphere. The gore effects are a little dodgy, though, something that O'Quinn himself really disliked about the finish film as you can tell them blood splashes are just desperate and cheap.

Nothing further to discuss, Stepfather 2 is really just that. Unnecessary sequel but overall still watchable. 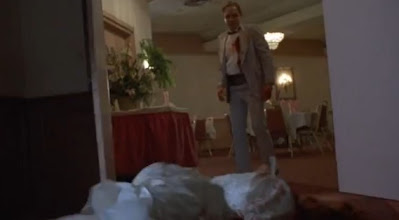 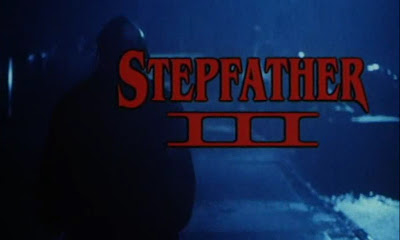 Some years passed after, again, surviving a fatal chest wound (a hammer claw to the chest! Who lives through that?!), the stepfather escapes another institution yet again and seeks a back-alley plastic surgeon to alter his appearance so no one would recognize him. The result? Goodbye O'Quinn and hello Robert Wightman! And as a reward for the surgeon? He cut his throat with a bonesaw.

Nine further months later, the stepfather, now taking in the name "Keith Grant", finds another small town to start his life anew and begins dating Christine Davis, a divorced school principal he met at an Easter Sunday dance. Things would have gone smoothly again, but with his new son Andy being in a wheelchair and disinterested with having a new dad, as well as discovering his new wife is infertile, Grant starts to lose his noggin. Again. So he cheats on his wife in hopes of finding a better partner and plans to murder his current family before moving on. But with Andy growing more dubious of his new father, and many other unfortunates getting into Grant's nerves, it won't be long before we're back to familiar roots as the Stepfather lies and murders his way to perfect his ideal family.

So that's three movies with the same plot now, only here you can really tell they're just sugar-coating it. Gone is the depth of the first two and in comes the slasher film stereotypes wherein our killer must utter one-liners for every kill he makes and said murders have to be butcher shop bloody. 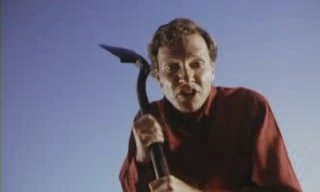 Frankly, I think gore is The Stepfather III's only selling point, as its redundant plot and hammy acting really fails to bring in the scares that the first movie (and a little bit of the second) have. The problem is that this approach doesn't work too well here; the opening murder itself might as well foreshadowed the movie's cheesiness as it ruined itself with a bizarre slow-motion camera effect that not only slows down the scene but doubles the picture to a trail too. In the meantime, the next following murders lack much of the intense build-up, so it's gored red to the max. I would normally blame the cheap budget for this one but I believe its more on creativity and restraint. And when I say restraint, I meant making the family as realistic as possible. (computer wiz kid in a wheel chair that miraculously walked in the end anyone? Yes, this is a horror movie, but...how?)

But should it be watched as a standalone movie, The Stepfather III is still popcorn-friendly enough not to be taken seriously and its messiness is something gore-hungry fellers can enjoy. Me included. Also, you can give this movie some credit for at least ditching any lean possibilities for another follow-up and ending a franchise in a splattery way that not even our killer dad can survive. I guess they're finally aware that what they're doing is close to being shit and just decided to end it here (Hallelujah...), so I'm very thankful for that.

Whether we really needed this sequel or not, The Stepfather III is a half-and-half good/bad movie with varying levels of entertainment. If cheese works for you, then this'll be a fine flick. But if you're the kind of folk who prefers realistic thrills than cartoon gore, then I guess you'll be disappointed in this one. 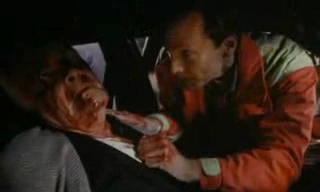 Bodycount:
1 male had his throat cut with bonesaw
1 male beaten and hacked to death with shovel
1 male repeatedly hacked with rake
1 male beaten to death against steering wheel, immolated in car explosion
1 male shredded through woodchipper
Total: 5
Posted by Kaijinu at 7:51 PM