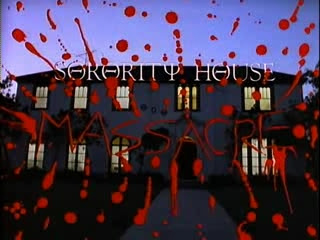 For every successful movie, we get a clone. Whether it's a rip-off or a cash-in, one cannot beat the fact that most directors would start off either doing a tribute to classic titles such as Halloween or Friday the 13th, or just thinly disguise a plot-copy with loads of blood and nudity.

Sorority House Massacre falls in the middle of ripping-off a title and plainly making a tribute for it, but the simplicity of its plot and the lack of imagination made this slasher title all but exciting.

Taking a weekend off with her girlfriends to a Sorority House, Beth finds herself not only moping for the death of her aunt (who had been raising her ever since she's orphaned) but also plagued by a series of visions and dreams involving a bloody man with a knife. She might be seeing these all in her head but she can't shake off the strange vibe she's getting fromthe Sorority House itself. It's like she's been there before...

Meanwhile, an escaped loonie (who also happens to be the guy in Beth's dreams) escapes from a mental asylum and began to make his way to the Sorority House, slaughtering anyone in the process. Were these kids in the wrong place in the wrong time? I Think Not!

Just in case you're not seeing where all of this is going, Sorority House Massacre is nothing more than a rehashed tale of psychos and bimbos out for a night of terror and gore. However, terror isn't the film's strongest point and even more in terms of gore; the first hour had us watching Beth suffer one unexplained vision to another, having to theorize that she might be seeing some suppressed memories in the form of a clairvoyant vision. Then again, that ain't much of a theory now, isn't it? Not with a convenient power outage leading us to an old fashioned scary story telling around a warm fire, which so happens to also a hint to the connection of Beth to the killer. Believe me, if you'd seen as many horror flicks out there as I did, especially slashers, you don't need a rocket scientist to figure that out.

The last half would be the part where all the gory kills should have been; either blame it on the low-budget or the stale plotting, the murders hardly met any of my bars, as nearly all kills where knife stabbings accompanied with bad acting. Not gonna dwell into that acting since I believe we don't watch movies like these to criticize some talent's acting, so the least they could do is have these cast die off more memorably and Sorority House failed to to this.

But, all in all, Sorority House Massacre is still a watchable rental. The movie isn't any better than any other B-grade slashers out there, but it ain't any worse than them either. It's still a slasher movie, it did what it's supposed to, only on a half-assed job. Acting? No. Gore? Hardly. Psycho? Just a guy with a knife and a linked past. Entertaining? Passed! Just open a hot bag of popcorn, break open a few cold ones and you got yourself a worthwhile B-flick to enjoy!