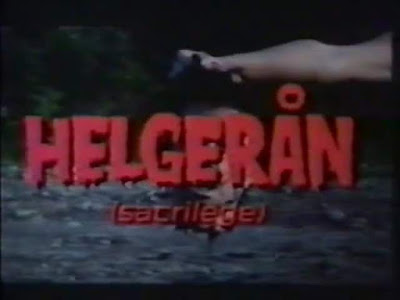 So here's something of a rarity for you lot; a late 80s slasher that's one part religious drama, hailing all the way from Sweden, an hour and fifty-five minutes long (?!) and directed by sexploitation genre innovator Joseph W. Sarno. Classy~

It starts with a couple in bed at a cottage somewhere in the mountains, no doubt well rested from a night of copulating. The woman, wanting to freshen up a little, steps out to a nearby river, only to hear something following her into the woods. Thinking its her boyfriend, she yells at it to quit screwing around, but what she didn't expect is to be responded with a sharp sickle through her neck, decapitating her before the killer lifts her head for a title card!

The scene then shifts to a dark and stormy night, as members of a Christian community hold a mass and get an unexpected visitor in the form of a rain-drenched woman named Sarah, claiming to be the daughter of one of their late members. This momentarily puts the head ministers of the commune on edge as her family was considered personae non gratae due to them committing acts against their devotion, but seeing Sarah's eagerness to be a part of their cause and save her sister, Gudrun, who they believe is possessed by evil, they let her stay and be taught the ways of Christ as any good Christian cult would.

In the midst of this, George, a journalist, is sent to infiltrate the cult for some juicy articles, but ends up being toured around by Sarah and the two blossoms into a relationship that's closely kept an eye by their church. As a way for Sarah to do her part for the community, she and some adults are to hold a retreat in the mountains for a small gaggle of children, the very same mountains where a sickle-wielding maniac is lopping off heads.

And lop heads they do, but only after movie lumbered about fifty or so minutes from the first rolling head on the dirt we've seen in the opening. By that time, the film eventually recalls its slasher half, complete with sect members getting frisky with one another while cheating on their spouses, and Sarah starting to show a bit of unhinging as she starts blabbering about her sister and being summoned into the woods to pray for her safety. You can smell the red herrings from here on, played up to high cheese as evil twins and lesbian longings are thrown in to the crazy plot. (And seeing the movie still has another approximate hour to go at that mark, the writers really took all their time to milk it.)

There's a strong focus on Christian dramatics in the entirety of Helgerån (1988), as TV soap-quality banter barely veers away from Sarah's possible need of professional help and how that clashes with the commune's belief of spiritual salvation. The bloody violence, tongue-in-cheek acting and exploitative suggestiveness, though, are still present to knock it back to cheesy slasher territories, but the result is nowhere that great with low count kills lacking creativity (all beheadings, albeit some do try to be exciting by decapitating victims by the mouth, or having their hands cleaved off, too) and the story is at a lost for a more exciting finale. (Or any resolution, to be frank)

Still, the film's pairing of over-the-top try-hard religious plotting with cluttered tone and acting is just too unintentionally entertaining to dismiss this film completely, so I wouldn't say this is a total fluke. Its may lack quality production-wise from lighting and editing to special effects, I do find some of its concepts and set-pieces to be interesting enough to encourage a bit more patience from me to power through until the end, down to the cheesy final lines.

Not everyone would get it, nor appreciate it, so I can't really recommend this willy nilly, but if you think you can withstand nearly two hours of cheese for some beheadings and convent boobs, then brave on, fool. Brave on.