Under Shades As Big As Hatchets: Massacre (1989) 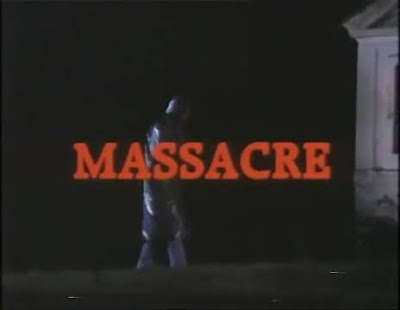 The film opens with a guy in large shades enjoying a morning car ride before spotting a hooker in the middle of the roadside. Thinking she scores a lonely dude looking for a quickie, the lady approaches the man in shades only to get a nasty surprise when he produces a switchblade and a hatchet. Off with her head and shift scene to a graveyard at night.

Here we now follow a filming crew busy creating a horror masterpiece (?) but the director isn't feeling any of this. Thinking the production needs to get in touch more with the otherworldly to get the eerie feeling right, he hires a medium and arranges a seance to be held at a local club. His crew, in the meantime, have their own drama and antics to take care of, including the abusive relationship between the producer and his bare-it-all wife, a drag show photo-shoot, and the movie's leading lady Jennifer getting hot and steamy with her boyfriend Walter, a police detective investigating the opening murder which he believes is connected to four others from the last few days.

At the night of the seance, hired medium Madam Yurich attempts to enlighten the crew by beckoning her usual spirit guide, but her session gets interrupted by an altogether different spirit. Something strong enough to knock everyone off their seats and cause a paranormal tremor. The seance is ended no soon after but, little do these people know, a massacre awaits them as they are now marked for death.

Released under a marketing ploy by producers Antonio Lucidi and Luigi Nannerini to have legendary Italian director Lucio Fulci stamp his name over their series of low-budget horror flicks, Andrea Bianchi's Massacre (1989) doesn't quite capture the same level of shock and sleaze many early day Italian giallo titles have. What it is able to do, though, is walk a line between cheesy bodycounting and convoluted murder mystery, only dragged down by a somnolent script where endless hammy dialogue overshadows horror scenes. This have the film hobbling its way through the possible suspects with police procedural and tantalizing character antics bearing little suspense to speak of, but this isn't to say it didn't try to break expectations.

The fact that we get to see the killer's identity as early as the pre-credit murder meant we're up to something a tad different for our mystery, and this is hammered further by a few more twists the further we go. It wasn't until Massacre (1989) reaches its climax that we get some stalk-and-stab action and blood work going, plus some bouncing topless nudity for that exploitation taste, though its somewhat neat ending felt unsuitably hokey with its last reveal and unanswered parting shot.

Nothing much else to speak of, frankly. Massacre (1989) is just too linear to be an old-school giallo, but it's punctuated with enough murders, cheese and curveball in its plot to be a fun occasional rental, or a must-have for Italian horror junkies considering its rarity.