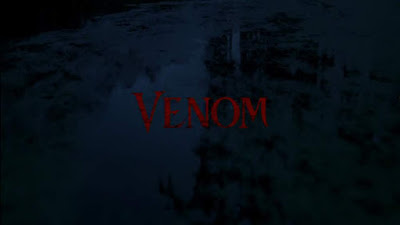 
Before the Adam Green's Hatchet franchise graced our screens with its own brand of bayou bodycounting, director Jim Gillespie of the I Know What You Did Last Summer (1997) fame took a quick stab on doing a backwater dead teenager flick with the likes of Venom (2005), a back-to-basic approach to the sub-genre with a taste of swamp muck and voodoo mayhem.

It was a rainy night at a small Louisiana town when an old mambo priestess unearths an old suitcase and loads it in her car. Elsewhere, drama unfolds between teenagers Eden and her boyfriend Eric as they argue at a bridge concerning Eden's New York college application, which was accepted much to Eric's worry as this meant they'll be far and apart. Their lover's quarrel soon got the attention of local tow truck driver Ray (who's also the pariah father of one of the kids in the movie), driving by and making sure these two aren't digging into each other's throats, only for the priestess to rush in and swerve to the edge of the bridge while avoiding Ray's truck.

After he was able to pull the old woman out of her car, Ray unfortunately ends up trapped inside and falling into the river instead, getting a nasty surprise no sooner when the suitcase released a swarm of snakes which proceeds to attack him as he drowns. By the time authorities arrived, the mambo dies from her injuries and there's nothing left to save of Ray except his soggy corpse which they proceed to fish out.

Unbeknownst to them, the snakes that attacked Ray were no ordinary serpents as they're possessed by the evil of people they’ve sucked out during many voodoo ‘milking ceremonies’ the priestess performed. Now with the evil residing in his body, the truck driver returns as a murderous revenant hellbent on ending anyone in his way, hapless teens included.

While it has unfortunate luck of bombing due to being released days before Hurricane Katrina hits the United States, as well as meeting the discontent of critics who has no time for simple slashers as this, Venom (2005) is, personally, a surprisingly okay teen horror flick that does succeed on harking back at the days of simple stalk-and-stab thrills. Granted its plot is nowhere close to something we hadn't seen before, not to mention the near paper-thin characters and their wasted opportunities to be a lot more interesting (After all of that emotional drunken breakdown, Ray's son couldn't stick around any longer?), but what it lacks in depth is made up for atmospherics, creative demises and some  interesting mythos.

Working around genuine small town feels, the Louisiana backdrop provides enough murky swamps, looming trees and muddy dirt roads to encapsulate the fair-numbered casts in a near isolated tone that just elevates the Southern Gothic gloom and doom the film wields. The direction is pretty linear and quick, wasting no time getting into the action as soon as possible and get some blood flowing, so I like the fact that all drama and details were given to us straight and easy, enough to lecture our audience regarding who's who and, too, the lore behind the threat.

The whole concept of a voodoo-centric killer zombie was uniquely and effectively introduced here too, something I enjoyed further when they actually explore it a tad more through some interesting set-pieces like using a human body as a voodoo doll and red chalk within the house as mean of protection. The killer himself is basically a just rotting juggernaut, so the killings are no short of being bloody and occasionally chunky in gore, despite one to three murders being offcamera,. The only downside I can get from him, however, (apart from the annoying wobbly camera trick they use whenever we get a close-up) would be his easy demise at the end despite all the time he kept going and going, shrugging off shotgun shells and even being burned whole. But, then again, he was more than simply hobbled, so it kinda makes sense.

Quite sad that this film doesn't get that much attention seeing that its simplistic take can, without a doubt, cater to a crowd, particularly those who can appreciate something bloody and mystic with a rightly balanced Southern fried undead swig. So rather than leaving in in the swamp, try and see Venom (2005) as a welcome and worthwhile addition to any hardcore slasher fan's collection. Who knows? Perhaps that collection is where it belongs.

Bodycount:
1 male drowned inside a sinking car
1 elderly female hits her head against a car window, dies
1 male attacked, killed offscreen
1 male had his throat slashed and chest hooked with a crowbar
1 female found murdered, body hanging in chains
1 female crushed underneath a car, face sandblasted
1 male impaled with a crowbar, arm torn off
1 male ran through with a crowbar
1 female slashed on the neck with a knife
1 female impaled through an uprooted tree
1 male stabbed in the head with a pick
Total: 11
Posted by Kaijinu at 11:05 PM