Bored In A Thursday, Because Of Sister Monday: A Nun's Curse (2020) 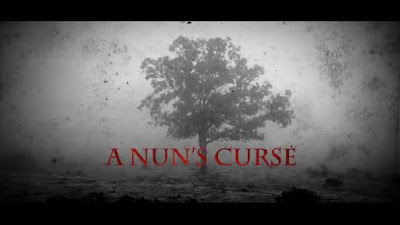 Four "friends" (questioning that term really hard for this film) on a weekend trip take a detour to an abandoned prison so one of them, who's obsessed with a murderous nun named Sister Monday, can take some photos for her thesis. They, however, find themselves stranded there when the car keys mysteriously goes missing, and with a storm brewing soon, the gang has no other choice but to enter the dilapidated building.

From that point on, we can technically summarize the next bulk of film as exposition overload as our lead girl, Ashley-Kae (Edwards), talks nonstop about Sister Monday, the nun's crimes, and how the damn religious figure haunted her childhood after her dad told stories about the murders. The rest of the characters either just hang around and be their horror flick cliched selves (makin' nut jokes, being the bitchy sister and whatnot) or get annoyed with all of this Sister Monday talk, as you would at someone who kept on and on about it like a damn record player.

Once in a while, we do get flashback scenes of the aforementioned nun (played by Sleepaway Camp (1983)'s Felissa Rose) visiting prisoners and murdering them with weaponized religious tools like a crucifix dagger and tainted communion wine, but the present day bodycounting doesn't start until about almost an hour in, quickly snuffing away the one-note characters until only Kae remains. We then get treated to a standardized cat-and-mouse deal with a twist that's fairly obvious considering all the tropes and trappings we've been tripping over from the start, as well as a finale that I'm pretty sure they got from Slaughter High (1986), only cheesier and forced with its positivity. So, no. Not really a good payoff after sitting through all of that Sister Monday babbling and unlikable character dynamics.

As you can tell, I'm not that impressed. The gore effects are good and I like the very idea of a murderous nun haunting a prison from which she slain convicts, but the story and its execution is just tiresome to watch as a final product, even with its short-drawn run time of 73 minutes. What else is there to say but I would rather get chased by an angry corn cult made up of sickle wielding children than subject myself to another round of this. Nuf' said.