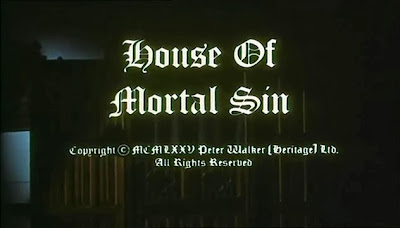 
The idea of a slasher film with a murderous pastor as a villain is always a cheeky treat for me; if done right, the irony of this concept can be deliciously juicy as an exploitation piece, as well as terrifying looking into the fact that it can happen in real life with many people in respected positions abusing their authority. Pete Walker's House of Mortal Sin (1976) is a good example of this, serving us a distressing scenario about an everyday woman being stalked by a disturbed and very repressed pastor.

Down in the dumps from a recent nasty break-up, Jenny Welch (Susan Penhaligon) opted to pour her heart out to an old friend, Bernard (Norman Eshley), who entered as a curate at their local Catholic church. When she goes to see him, though, she instead ends up wandering into a confessional box where Father Meldrum (Anthony Sharp) secretly records her confessions, including that of a secret abortion she had. The more Meldrum creepily asks her for details about her sex life, the further Jenny gets freaked out and soon books it out of there, unknowingly leaving her keys behind.

What soon follows is tragedy upon tragedy as Meldrum starts to stalk Welch, breaking into her house to lurk around and use the confessional  recording to try blackmailing into coming back to him. Should she choose not to, or if someone gets too close to finding out his true nature and intentions, Meldrum wastes no time killing whoever gets in his way whenever he fails to lie out of trouble.

It's clear House of Mortal Sin (1976) aims for controversy by putting organized religion under criticism and showing us the possible dark side a man of the cloth would harbor within, but for its worth, it is still a darkly entertaining film with honest-to-God chills and a fairly intriguing villain.

There is no doubt that Meldrum is one of the key character that kept this movie alive; his obsession over one woman is just frightening for the lengths he's willing to go, all the while tormented by guilt over his urges to the point he has no problem lashing out at anyone, this includes his poor bedridden mother who has no choice but to listen to her son ramble out madness. Anthony Sharp did a wonderful job here bringing this mad pastor to life, deceiving us with his old, pompous and frail demeanor before engulfing us in toxic malice and brewing lust through hammy yet creepily uncomfortable dialogue, as well as the occasional bloodshed with everything from burning incense censers to rosary beads getting the profane treatment of being murder weapons, resulting to a few impressively brutal kill scenes.

On the other side of the poisoned communion wafer, Penhaligon played her Jenny character decent enough as a memorable and vulnerable victim of Meldrum's mania and Eshley leads a strong and rather likable liberal pastor whose decision for celibacy is tested as he starts to grow feelings for Jenny's sister, played with girl-around-town spunk by Stephanie Beacham. We also have Sheila Keith (who starred at two previous Walker movies) as Miss Brabazon, an imposing figure who looks after and tortures Meldrum's mother as a side element the film brings up from time to time. Her slice of the story, however, does come into some importance at the end where in it's revealed that Meldrum's demented disposition and Brabazon's continuing torment upon his mother are tied together.

Story-wise, House of Mortal Sin (1976) does not deviate much from its main plot, hiding little to no twists in its direction while borrowing elements from other psycho-drama and bodycount thrillers of the time. It goes through the events in an escalating manner that the stalker drama sequences that comes in between the murders felt natural and piece everything together interestingly, albeit suffering a few padding issues that's close to tedious. This remains to be the case until the last act, when the movie picks itself up agreeably before swinging a bleak ending at us that not only is littered with bodies, but broke expectations, too.

In my eyes, House of Mortal Sin (1976) is one of Pete Walker's better movies and an underrated proto-slasher that's full of inventive ideas, old-fashioned psychological horror and a shred of mischief, all meant to shock and stir. A Grand Guignol commentary on religion, there's no denying this is a unique effort worth seeing.