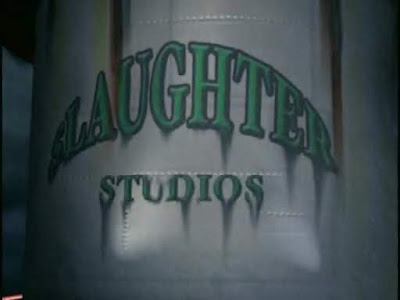 When the titular movie studio accidentally kills an actor during a filming session decades ago, all productions were stopped and abandoned, leaving the studios forgotten for years to come. That is until a present day aspiring director, struck by the nostalgia bug, plans to do a guerrilla-style horror film within Slaughter Studios as a bit of a tribute before it gets demolished in the next nine hours.

Armed with a script for Naughty Sex Kittens vs The Giant Preying Mantis, a camera and the will to break-and-enter a private property while avoiding a security guard in his hourly rounds, a small crew makes the best of what they can get and do within the cobweb and hobo-infested building, unaware that something in the crumbling walls and dusty dressing rooms have been awakened by their intrusion. Something with an axe to grind.

Before it was Slaughter Studios (2002), the original pitch for the movie was supposed to be a remake of The Slumber Party Massacre (1982) penned by writers John Huckert and Dan Acre, only to scrap it and switch over to a filming-gone-wrong type of plot instead after visiting Roger Corman's studios in Venice Beach, California, which was in the process of being torn down. Life-imitates-art inspiration took over the two and roped in producer Damian Akhavi to help them out with the new story, as well as securing approval from Mr. Corman to use the dilapidated studios for a 12-day shooting.

The end product is a cheeky blend of cheddar grade comedy and whodunit slasher hokum as everything from possible supernatural forces to disgruntled ex-actors get toyed as likely culprits to the massacre happening under the crew's noses. It's mostly a shlocky yet fun romp poking fun at cheap genre movies and the filming that happens behind the scenes, but the overly sexualized Porky's (1981)-inspired antics gets pretty tiresome fast, so much so that the lesbian sex scene isn't as titillating as it should be when there's an annoying perverted Indian stereotype horn-dogging his way into the tits.

All the characters here actually have the charm and dimensions of a cartoon cliche, a point that I can work with no problem at all if a few of them wasn't in our face with their ridiculousness and sultriness most of the time. On the plus side, by the time these people are made aware of the murders, Studios takes a sweet turn for an old fashioned slasher finale with lots of scenes with the killer stalking and chasing targets in the shadows or obscured through point-of-view shots. The murders are generous on the blood department with a modest body count to boot, leading to a fun car chase finale followed by a twisty reveal that got me chuckling.

If you can get past the selection of annoying characters and overlook the soft-core erotica, Slaughter Studios (2002) isn't half bad. It's slick in quality, can be brutal when it needs to be and should a joke hits, it hits with a hearty punch. A campy spoof on one end, a fairly fun bodycounter on the other, this is an unexpected gem that's worth a watch!

Bodycount:
1 male shot to death
1 male hacked to death with a pickaxe
1 female beaten to death inside a recording room
1 female attacked, killed offscreen
1 female attacked, blood splash seen
1 female strangled with a length of film
1 male stabbed through the head with a metal rod
1 male ran through with a pitchfork, decapitated
1 male crushed by a dropped stage light
1 female gets a swung hook through the head
Total: 10
Posted by Kaijinu at 10:07 PM