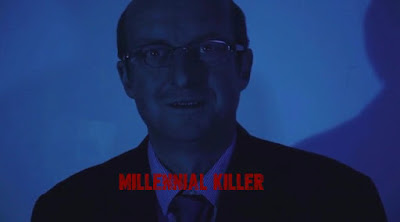 So, an hour and eleven minutes of a nameless middle aged real estate agent (or some guy posing as one) luring millennials to see a listing for affordable apartments, only to murder them or, for the case of one unfortunate girl, capture and taunt one into watching some more killings happen right in front of their very eyes.

Not quite the story, to be frank, as that's pretty much everything going on for Millennial Killer (2020). Just a rinse-repeat cycle of this guy finding young adults to kill after promising them a location with a view, punctuated with a kidnapped victim slowly losing their mind as the titular killer continues their assault on both her and his victims.

I am very certain this is a satire of sort. I mean, the title alone has the obvious tone expressing one's disdain towards the young adults of today, but the execution is just cheap. The murders are cheap. (Save for maybe one or two or them) The development for both the killer and his captive is cheap. It doesn't really go anywhere but the same easy-ass twist reveal that someone close to the killer was mugged and murdered by some obnoxious thugs so he's taking it out on the rest of who he perceives as rotten millennials. Heck, even the ending is awfully lacking; just the cops showing up and him committing suicide, then the credits roll.

An obvious micro-budget production, Millennial Killer (2020) has thought, just not enough imagination or wit to make this anymore entertaining or at least interesting enough to invest it our time. If you really want to see a "boomer" go nuts on a "millennial", I suggest seeking out Tone-Deaf (2019). Now that's a murderous generational conflict worth watching!