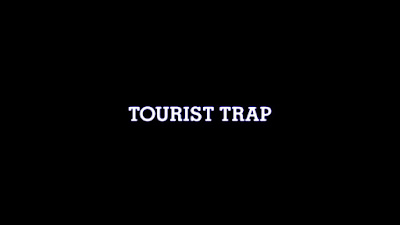 Inspired less by John Carpenter's Halloween (1978) and, instead, taking cues from Tobe Hooper's The Texas Chainsaw Massacre (1974) and Brian De Palma's Carrie (1976) (among plenty others), Tourist Trap (1978) is a slasher that defies structure and embraces nightmare logic, resulting to a surreal trip down familiar footings and then some.

When a friend fails to turn up after working on a car tire and their spare ride breaks down in the middle of an isolated countryside, a small group of youngsters foots to a nearby watering hole and garage that's also close to the titular tourist trap. There, the teens are greeted by an eccentric yet kind-looking old man named Mr. Slausen (Chuck Connors), owner of the trap which turns out to be a wax museum filled with a collection of mannequins and life-like mechanical figures made by Slausen's brother who left for the city.

The gang is allowed to hang around the museum under Slausen's approval, given that they don't leave and go snooping around the house next to them while he and another dude of their number drive off to town to find assistance. Finding Slausen to be a tad suspicious, most who remained choose to disregard the old man's request, not knowing they have sealed their fate to an unimaginable masked horror awaiting them.

Truth be told, the only flaw I endured through Tourist Trap (1979) is its slow padding moments wherein characters are either just walking around and sticking their noses in places it doesn't belong, or getting chased for the umpteenth time. It can get testy, but other than that, everything else about this movie just works.

Its meager budget may have shown the rough edges of the movie's production, but I cannot completely disregard this lack of funds as a negative aspect as it did little damage to the final product and, in some way, may have even help the story somewhat achieve a feat of creepiness and surrealism, particularly on how they utilize the simplicity of their special effects to it full unsettling potential. The worn-out and cluttered set-up of both the tourist trap and the killer's home, for example, not only boast a claustrophobic feel from the piles and piles of mannequins displayed or trashed around, but little details like the smooth gazes of the figures' glass eyes and the janky movements they do in places add an air of mocking menace and haunting uncertainty to what exactly the teens are dealing with.

Giving the killer telekinesis is a concept not often tackled in slasher movies, let alone have it leave out any solid ideas as to how they ended up with it and to what extent they can wield it. This, however, works favorably in Trap's case as the absence of background concerning the killer's psychic abilities strongly adds to the surrealism of the massacre, especially when it eventually reaches a climax where the lines of living, inanimate or dead gets blurred so bad, it's insanely delightful in its cheap yet effective execution. The kills, in turn, are an unconventional set with only a dab of blood here and there, as it focused more on the creative demises of the casts with sound design and editing helping elevate the techniques used.

More or less, Trap's strength lies more on creep factor than violence, an approach that succeeds greatly through its share of silliness that managed to double as effective eeriness, like how its own score flips from bells and whistles to exaggeratedly gasps over striking violins. It also helps that Chuck Connors does a wonder of a job conveying this tone to his scene-chewing range of personality from a calm old timer-type to a deranged man-child with godlike powers, giving little points like out-of-place cracker dinners with mannequins or the fact the killer couldn't stick to just one masks all the dinky and disturbing identity they needed.

Tourist Trap (1979) dwells openly in the unknown, fancying itself to leave its logic at the door to dish out a nightmarish story for us to enjoy. It's unique and disconcerting in all the right ways, thus a cult classic deserving of its status and that little space in our growing horror film hoard.

Bodycount:
1 male impaled by a levitating pipe
1 female strangled with a scarf
1 female had her face covered with plaster, suffocates
1 female gets a thrown knife to the back of her head
1 male killed offcamera, mannequin duplicate revealed
1 male gets an axe to the neck
Total: 6
Posted by Kaijinu at 1:38 PM