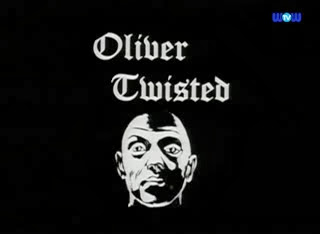 An institution gets more than they bargained for when Oliver, a car-crash-survivor-turned-iron-plated-loonie, snaps out of the drugs meant to keep him asleep for a routine hair cut and kills two orderlies. He slips into a coma after a third orderly shoots him repeatedly with a dart gun, but now the institution doesn't want him anywhere within their walls. Thus, they opted to go with the next best thing they could think of: send the comatose killing machine home with the closest living relatives obliged to take care of him.

In comes Mrs. Mary Happ (Karen Black), who's rightfully upset over the fact the institution's only giving her the choice of either hosting the comatose nephew in her house, or pay thousands of clinic bills which she cannot afford. She's eventually swayed to do the "right" thing and takes the man home, much to the delight of her son Jeff, who immediately becomes obsessed with the dude, and uneasiness of her daughter Olivia, who starts to have visions of murders-to-come.

With Mrs. Happ leaving for a business trip and her birthday is just a few days away, Olivia choose to ignore the visions and go on with her life taking care of Oliver and hanging out with her friends. But the further the days go by, the more she experience these visions and it isn't long before people starts disappearing.

Very misleading title aside (Sorry, boys and girls, we have to settle with Phantom of The Opera (1989) for our slasher-fied literary classics for now),  Oliver Twisted (2000) is an okay oddity that tries going for the teen horror dramatics by centering most of the plot on Olivia's struggles to understand her premonitions, the odd set-up of having a cousin they never heard of getting placed in home care, as well as the unnerving feeling that Oliver isn't really in a coma and could go up and out chopping mailmen to death. A lot of cheesy acting and bad hairdos meant this is all done with cringe and ham, but the misguided aim for seriousness just falls into silly mishaps and unintentional humor that are gladly still watchable as guilty fun.

Despite the discount bin production quality, the movie still packs some serious gore effects and a few effectively executed scenes, like the chunky red offscreen scalping of an early victim and one of Olivia's visions involving a dude getting his face and gut assaulted with a machete in front of a busy convenience store. Cameos were also afforded as we have the presence of Karen Black and 70s cop show CHIP's’ Erik Estrada gracing our screens, though both have very little to do apart from being the adult figures popping up from time to time, checking on the Happ family.

Story could have used a once-over to fix the plot holes tattering it and maybe even do a better job hiding the obvious twist reveal, but the final product still entertains as junkfood horror so Oliver Twisted (2000) is not a complete trash heap to avoid. Good enough for an overnight rental and that's it.