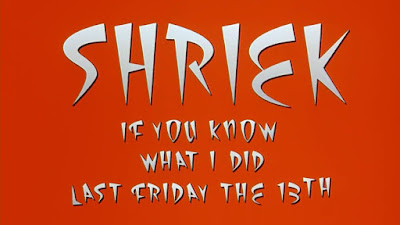 Shriek If You Know What I Did Last Friday The 13th (2000)
Rating: ***
Starring: Aimee Graham, Chris Palermo, Kim Greist

Remembering she still needs to survive, however, Screw does manage to escape only to run straight to towards a bug zapper. Which kills her. Not exactly the killer's finest moment, but that isn't gonna stop him from smoking a relaxing cigarette if only, that is, he remembers to remove the mask first before smoking, thus setting it on fire and melting it down from a hockey mask to a store-bought Ghostface. 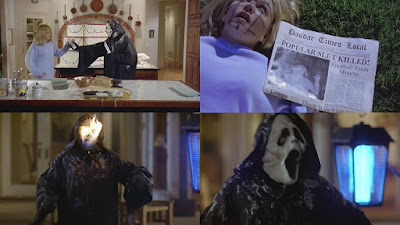 And curiously Dawson's experience last Arbor day that involves a deer suit, a block of salt lick and a house explosion caused by a redneck's overpowered flatulence. I don't even want to know...

Threatened, the kids decide to hole up in Slab's house at a deserted location for safety and throw a party because, hey, Slab's parents are dead! Who's gonna bother them- oh, right. The killer. Well, at least they have help: all the while this is happening, Barbara's mall cop brother Doughy, initially dismissing the recent murders as a prank(?!), teams up with cable TV reporter Hagitha to uncover the truth behind the killings, as well as maybe snag a date with her. It's only a matter of time before these two to stop this maniacal killer, given that they wouldn't get distracted by 24 hour pizza deliveries, drum solos and a game of strip poker.

On second thought, maybe the kids can fend for themselves. Afterall, it's not like they're dumb or unlucky enough to have themselves killed...

Forgive me, friends, for I have sinned. And the sin in question is sincerely enjoying this film, even more than Scary Movie (2000)! Perhaps it's the nostalgia glasses doing its work since I remember watching this as a tween and enjoying the heck out of it. Perhaps this spoof has a more coherent and structured plotting compared to Scary Movie (2000)'s disjointed and overly chaotic "everything goes" approach to its spoofing, something that goes so well with my preferences. Or perhaps I find the jokes here having more cheesy heart to it than the gross out, overly sexualized and aggressively crude gags of recent parodies, the writing trying its best to be as subtle as it can even if it is tackle the same kind of toilet humor surrounding farts, erections and boobs.

With this movie being a direct-to-video production, there is no denying its noticeable cheapness from props and special effects, to editing and acting. Hell, I'd even admit that the writing and visual gags are far from comedy gold, knocked down a few steps due it playing safe by avoiding as much extreme expletives and exploitative raunchiness as possible like its catering to an audience of twelve-year olds. But I honestly find a lot of charm from that fact considering Shriek did achieve getting some modest laughs out of me, like watching an old cartoon brought to life with illiterate highschoolers, goofy sound clips, and inept killers who succeed in murdering background characters but not the main ones.

Seriously, Shriek is perhaps the only movie I know where killers fail to commit major murders and it doesn't get me mad. Instead, the film have accidents and Darwinism play the role of its "killers" and as much as many people out there would find a masked maniac who couldn't do a murder right rather annoying, I chuckle at these wasted opportunities to snuff out at least one of the major players, made even funnier looking at how gruesome and bonkers some of these deaths can get. (One explodes to bits due to an overdose, while another dies from being hit on the head by random debris (with comic-style sound effects visually popping up) only to be somehow electrocuted? Wait, what...?)

Honestly, I couldn't express enough how much this film works for me. It just doesn't feel like its simply poking fun at the two then-hottest slashers Scream (1996) and I Know What You Did Last Summer (1997) by being a satire of a satire, but rather it tries to capture the same kind of random zaniness and misguided deadpan from comedies like the Naked Gun series or the two Airplane! movies, with director John Blanchard (who has some history with comedy/skit television series like Madtv and The Kids in the Hall) understanding enough tropes and cliches of the source as far as they can to mold a joke or two out of them. Some hit. Some doesn't. Some didn't age well. (Ooo eee, ooo ah ah?) Some are simply in it because, well, fun. (Loving the Scooby-Doo esque chase scene with the pop-up film blurbs and the random band The Grown-Ups singing a cover of Pretty in Pink) 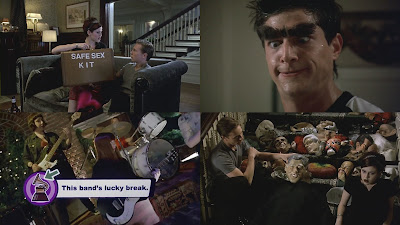 A mini-cult classic of sorts, Shriek If You Know What I Did Last Friday the 13th (2000) is an affable spoof made probably for those with an open sense of humor. A love-it-or-hate-it affair not without its own funny merits, as well as some odd ones like Prince getting parodied. Again. Like, Scary Movie did it and now this movie did, too. It's so weird. Is there something he had done around this time that caught the attention of both spoof flicks? I'm curious.

Bodycount:
1 female runs face-first to a bug zapper, electrocuted
1 male killed inside a van
3 males seen dead and getting mopped off the floor
1 female taken by killer and murdered offscreen
1 male executed via electric chair (implied in flashback)
1 female dragged into a locker, killed
1 male lassoed away by the killer, murdered offscreen
1 male immolated in a fart-related house explosion (flashback)
1 male choked to death on cheeze-whiz
1 bony remains found lost and forgotten behind shower room walls
1 male repeatedly hit on the head by thrown objects, lands on a Jacuzzi and electrocuted (somehow)
1 female on HIGH platforms walks to a ceiling fan, killed (and no one cares)
1 female gets a falling crucifix to the head
1 female dies from bee sting allergy
1 male explodes into pieces from steroid overdose
1 male shot
1 male caught in a net and sucker punched, presumed dead
Total: 19