The Unaborted Son of A Chinese Boogeyman: Devil Returns (1982) 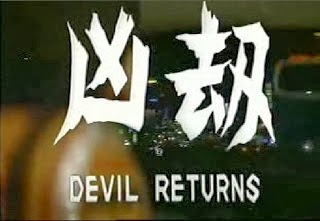 A serial rapist and robber is on the prowl in this early 80s Asian horror from Hong Kong and his recent victim Mei Hsun-Fang, a school teacher, has the unfortunate luck of getting a ride with him during one rainy night. Chased around a dilapidated building, Fang is soon beaten, raped off-camera and left for dead, but she miraculously survives and gets rescued by cops, eventually becoming the key suspect that puts her attacker under lawful execution via rifle shot.

However, Fang finds herself unable to move on from the incident as visions of the dead rapist pop up now and then, stressing her relationship with her was-boyfriend-now-husband Yu-Ching Lo. It gets worse when she finds out she's pregnant with what might be the rapist's baby and her mad ramblings leads to her try killing off the unborn child by attending an abortion clinic. That visit somehow ended up with a doctor being murdered by a possessed hand, flying around the room like Tina from A Nightmare on Elm Street (1984) before getting thrown out a window to his death.

Obviously, something supernatural wants her to keep the child, so Fang did the only sensible thing: jump off a flight of stairs and hoping it will do the job. Only it didn't. She gave birth prematurely to a normal, healthy baby boy.

Well, "normal" might be a stretch as the boy does apparently like to torment her by crying all night, only to stop when anybody else except his mum tends to him. Still convinced that her baby's evil, Fang takes it to a nearby temple under a friend's advice and got the evil exorcised out of the kid. (complete with head spins ala The Exorcist) It seems like a successful ritual, but Fang (and pretty much anybody else that comes along later that evening) will soon find that the removed evil has just manifested itself in the flesh, hellbent on killing.

A mad dash exploitation of everything supernatural and, later, a rip-off of John carpenter's Halloween, Devil Returns is well known for its sudden tone/sub-genre shift that divided attention from horror fans. For most parts, the film was more of an Asian version of Rosemary's Baby, tackling issues such as post-traumatic and post-partum depressions with a more obvious hint of the supernatural, up until the last third where it starts to carbon copy memorable scenes from Halloween. Looking pass the cheesy scripting and some questionable acting, it is quite deep and interesting for an exploitation movie from Asia to tackle this, building a nice set-up for the characters.

Because of this, I find it understandable why some of those who'd seen this movie were upset when it suddenly changes tone to that of a no-brainer slasher, with the sudden revival of the baby's biological (and now, supernatural) father falling a bit too random.

However, this might be a case more on personal taste and expectations; I first came upon this title through a review giving enough details to the story, including the change of tone, so this didn't came much of a surprise for me. So instead of being appalled, I came to enjoy it more seeing I knew which direction this film was going in the end. This might be because I didn't try to take too much of the movie seriously, even before the cheesy killing spree started, so the unoriginal last act came off to me as averagely entertaining.

As a fair and easy film, Devil Returns is an undeniable overseas cash-in to the uprising popularity of slashers over at the US of A, all in the meantime ripping off some other popular horror flicks to appeal a wider range of taste. Not really all that smart, but for some people who just love a bad slasher, this is worth a shot.

Bodycount:
1 male shot with rifle
1 male slashed with scalpel and beaten, thrown off to his death from a window
1 female had her head knock to a hanger hook
1 male impaled through with a knife
1 female smothered with shower curtains
Total: 5
Posted by Kaijinu at 5:26 AM