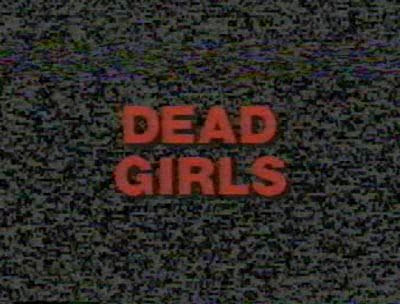 After her little sister committed suicide with her friends while under the influence of their death metal music, songwriter Gina travels back home with her band to make amends with her lost. But as the rest of the town apparently blaming them for the incident, she instead is plagued by hallucinations and nightmares driven by guilt.

Things are bound for the worse when someone in a Halloween mask, trench coat and fedora (must there be a hat? really?) is killing off one band member and staff at a time when these guys decided to stay for a while and relax in a nearby cabin. Could it be Gina's aunt and uncle, whose anger is enough to curse their own niece to hell? Or is it the mentally handicapped groundskeeper? The cop? Gina herself? We soon find out...after one lengthy exposition to the next.

This is as exciting as it gets, told true; Dead Girls had a lot going for it from a good opening and a story that gives us a chance to play whodunit, but with so little characters to care about, doing away cheesy scripts in a plot that takes too long to get around, watching the entire movie is suicide inducing enough!

Kills are plentiful and so does the gore count, Dead Girls actually dwells into a more psychological trapping at the near end as these girls begin to turn against one another from one paranoid attack to the next. But, again, it's really hard to get by with their uninspired acting and attempted-seriousness-which-does-nothing direction, with me being more bored than thrilled with their paint-by-number antics.

To top it off, it even has the most downbeaten ending I've seen for the sub-genre, a real gutsy one in an attempt to push their standards a bit higher. Kinda works really, just too bad that this would be the only grimly memorable thing about the entire film, damn odd as I'm sure not all of us are willing to walk through something as god awful as this plot just to see that.

A rather forgettable effort, the only mystery I see here in Dead Girls is when did they actually showed these girls jamming their instruments (for credibility's sake) and to how the movie managed to gather its own fan following. The latter must be of taste, which I obviously didn't have for this film...

Bodycount:
3 males and 3 females cuts their wrists, bled to death
1 male shot on the head with nailgun
1 female strangled with noose
1 female drowned on a lake
1 male stabbed on the back with shovel
1 female hacked on death with an axe
1 male shot
1 female repeatedly stabbed on the back with knife, throat cut
1 male beaten to death with a dead branch
1 male blown up with explosives
1 female left for dead
Total: 16
Posted by Kaijinu at 3:28 PM